Hyderabad, Aug 12 (IANS): Stand-up comedian Munawar Faruqui's proposed show in Hyderabad has once again triggered a row with a BJP MLA from the city threatening to stop the programme and beat up the artiste.

BJP MLA T. Raja Singh has warned that if the comedian goes ahead with the show, he would beat him up and burn down the venue.

A video of the controversial MLA threatening the comedian has surfaced on social media, in which he alleged that Faruqui had hurt the religious sentiments of Hindus by making jokes on their gods.

The BJP MLA's warning came a day after Munawar took to his Instagram account to announce his show -- 'Dongri to Nowhere' -- in Hyderabad on August 20. 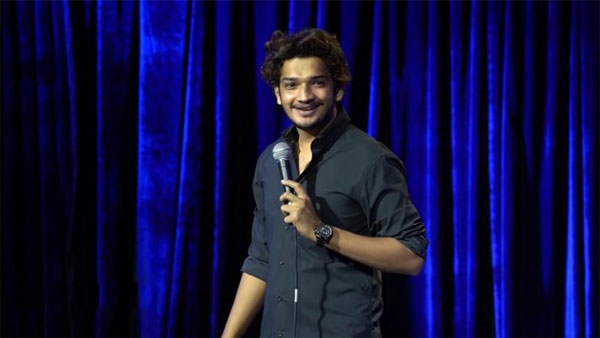 He had earlier planned to perform in Hyderabad in January but the show had to be cancelled due to a surge in Covid-19 cases.

"In the past too, our i***t minister KTR had offered police protection and invited him, saying his event will be a great success. But even then, when Hindu groups across Telangana united to threaten him, he got scared and cancelled the event," Raja Singh said.

"I am seriously telling this. Everybody knows about the law and order situation in Telangana. I am telling KTR, if you don't want it to deteriorate further, don't allow the comedian in Hyderabad," the MLA from Goshamahal said.

The BJP leader went on to issue an open threat, saying: "See what will happen if they invite him. Wherever the programme is, we will go and beat him up. Whoever offers him a venue, we will burn it down. If something goes wrong, KTR and the government and police officers will be responsible."

The BJP leaders had issued similar threats in January when Munawar had planned to perform. However, the show had to be cancelled due to the restrictions imposed on public gatherings in view of a surge in Covid cases.

Faruqui had announced his Hyderabad show on December 22, 2021, days after minister KTR had extended him an open invite.

The stand-up comedian had earlier tweeted that he was receiving several calls and mails from Hyderabad to perform in the city.

KTR had extended an open invitation to him to come to perform in Hyderabad, saying the city is truly cosmopolitan.

KTR had taken a jibe at the BJP government in Karnataka, after shows by stand-up comedians Faruqui and Kunal Kamra were cancelled in Bengaluru over threats from some right-wing groups.