Bengaluru, Aug 8: With Prime Narendra Modi announcing the Har Ghar Tiranga campaign all over the country to mark the Independence Day Amrit Mahotsav, Chief Minister Basavaraj Bommai has set himself a target of ensuring 1 crore houses in Karnataka hoisting the National Tricolour.

The Chief Minister, who is under home isolation following his being tested Covid positive, held a video conference from his residence with Deputy Commissioners and district in-charge ministers as well as Chief Executive Officers of Zilla Panchayats on the Quit India commemoration on Tuesday as well as the successful implementation of the Har Ghar Tiranga campaign.

Bommai reviewed the preparations for implementation of the Har Ghar Tiranga campaign and mentioned that distribution of national flags to the houses of people has already started. 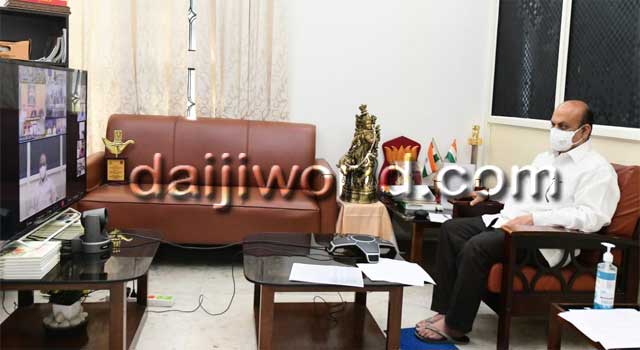 “Let us ensure the success of the Har Ghar Tiranga campaign by hoisting the national flag atop our houses meaningfully instead of doing it perfunctorily,’’ he said asking all concerned to create an atmosphere of Independence Day Amrit Mahotsav across the State.

The Chief Minister said the national flags can be flown atop houses from August 13 till August 15.

He directed Chief Secretary Vandita Sharma to hold a meeting with all the officials of the districts and direct the district administrations in the State to ensure that the targets were achieved.

The Chief Minister also asked the district in-charge ministers to visit the houses of freedom fighters in different districts from August 9 and honour them.