"Wishing former Maharashtra chief minister Uddhav Thackeray on his birthday...praying before Mother Jagdamba to give him a long and healthy life," said Shinde in his greeting. 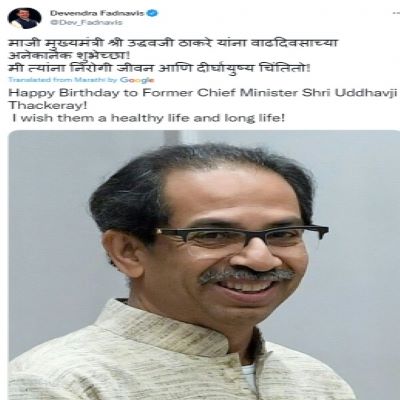 Later, a Shinde group leader claimed that the official greeting was appropriate as per protocols applicable from a CM to a former CM.

Since then, there is a dogfight, a war of nerves and a legal battle as the Shinde side attempts to assert its supremacy and claim of being the 'real Shiv Sena', but the Thackeray camp has rejected these contentions outright.

As he blew off the candles and sliced through the multi-tiered cake, the gathering comprising wife Rashmi, son Aditya and others, lustily cheered 'Happy Birthday To You...' as a grinning but a tad embarrassed Thackeray accepted the affection with folded hands.

Meanwhile, thousands of Sena leaders and ordinary party activists from Mumbai and other parts of the state thronged 'Matoshri' -- the Thackeray's residence in Bandra east -- to meet and greet the 'birthday boy' who was surrounded with his family and other close relatives.

Among the visitors were several seniors who came to 'bless' Uddhav, one came to present a sketch made in his blood, others carried flowers, bouquets and good-wishes for the Sena chief.