"I am not making wild allegations or firing in the air. I have documents to prove my charge. Instead taking action and arresting small fry, the government should go after the kingpins involved in the PSI scam,’’ he said speaking to media persons on Wednesday.

After the stinging remarks by the High Court against the functioning of the ACB and the two arrests of an IAS officer and another IPS officer, the Chief Minister should be ashamed. "Let the Chief Minister find out who received Rs 50 lac and who paid the amount as also the source of the money. I have evidence,’’ he said. 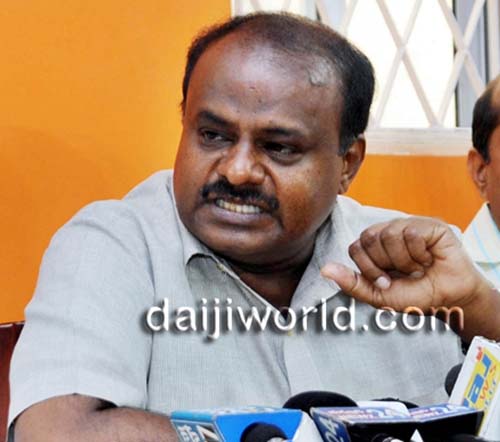 Kumaraswamy said there are allegations that a bribe of Rs 30 lac each has been collected from 25 candidates. "If another 200 to 300 candidates had paid Rs 70 to 80 lac each, what will be the total amount? Will the government probe and find out the real persons involved in the scam," he asked.

The JD(S) leader said a sum of Rs 5 crore was recovered from the residence of a senior officer during the previous Congress regime in Yeshwanthpur. "The then government protected the officer and placed him in a key position and the entire episode is forgotten. The present BJP government is following what the Congress did in the past. Both the national parties cannot be trusted," he said.

Kumaraswamy condemned the daylight murder of vastu expert Chandrashekar Guruji in the reception of a prominent hotel in Hubballi. There is no safety for anybody and all this is happening because of the corruption as police are not bothered to discharge their duties but making money, he alleged.

He attacked the BJP government for the rain havoc in the city due to the government’s mismanagement and failure to clear the drains. The ruling BJP and its leaders are busy making money in the name of development even though hundreds of crores of rupees are allotted. Nobody knows who has cornered the money, he said.

The former chief minister vowed to set right things if the JD(S) is given a clear majority. We are confident of public support as the people are fed up of both BJP and Congress, he said.