Los Angeles, Jun 25 (IANS): The three states of California, Oregon and Washington in the US West Coast announced that they will continue protecting abortion access despite the Supreme Court overturning its 50-year-old landmark Roe v. Wade decision which granted women a constitutional right to abortion.

The Governors of these states issued a Multi-State Commitment on Friday to defend access to reproductive health care, including abortion and contraceptives, and committed to protecting patients and doctors against efforts by other states to export their abortion bans to the West Coast states, reports Xinhua news agency. 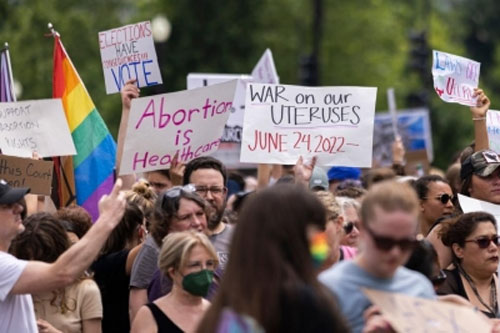 "This Multi-State Commitment affirms the governors' commitment in response to the U.S. Supreme Court's unprecedented decision to strip away a constitutional right that has been in place for half a century, leaving abortion regulation to the states," Office of the Governor of California said in a statement.

"The sweeping decision means that for patients in more than half the country, home to 33.6 million women, abortion care is illegal or inaccessible."

The three Governors also released video messages, condemning the latest ruling and sharing the view that the West Coast would remain a place where reproductive health care will be accessible and protected.

California Governor Gavin Newsom said the ruling was an devastating step toward erasing the rights and liberties that Americans had fought for a long time.

"This is not the America we know - and it's not the California way," Newsom said. "California has banded together with Oregon and Washington to stand up for women, and to protect access to reproductive health care."

"We will not sit on the sidelines and allow patients who seek reproductive care in our states or the doctors that provide that care to be intimidated with criminal prosecution. We refuse to go back and we will fight like hell to protect our rights and our values," he added.

As an immediate response, he also signed a bill to protect patients and health providers in California from civil lawsuits based on other states' laws.

The AB1666 bill protects doctors from legal and financial penalties if they travel to other states to perform abortions or treat out-of-state patients.

With Roe toppled, California has become the nearest state with abortion access for approximately 1.3 million out-of-state women of reproductive age.

Meanwhile, Washington Governor Jay Inslee confirmed that the law on abortion in the state remained unchanged, saying: "Washington state remains steadfast in our commitment to protecting the ability and right of every patient who comes to our state in need of abortion care, and we will fight like hell to restore that right to patients all across the country."

In her message, Oregon Governor Kate Brown said: "Let me be clear: You cannot ban abortion, you can only ban safe abortions and this disgraceful Supreme Court decision will undoubtedly put many people's lives at risk, in addition to stripping away a constitutional right that disproportionately affects women and has been settled law for most of our lifetimes."

She described the cooperative moves of the West Coast states after the Supreme Court's anti-abortion ruling as building the West Coast offense and pledged the states would "fight like hell to protect your rights and your safety".

"For all the Americans today feeling scared, angry and disappointed - for everyone who needs an abortion and does not know where they can access safe reproductive health care, please know you are not alone, and the fight is not over."

On Friday, the Supreme Court overturned the landmark decision that established a constitutional right to abortion in the nation.

"Roe was egregiously wrong from the start," Justice Samuel Alito wrote in the majority opinion. "Its reasoning was exceptionally weak, and the decision has had damaging consequences."

"It is time to heed the Constitution and return the issue of abortion to the people's elected representatives," the conservative suggested.

The court's three liberal justices dissented, saying that "many millions of American women" have lost a fundamental constitutional protection.

The announcement came after the Supreme Court had considered an appeal case involving a Mississippi law banning all abortions over 15 weeks gestational age except in certain circumstances.