Mangaluru: Malappuram man on 8,640 km-long walk to Mecca for Haj welcomed at Talapady

Mangaluru, Jun 10: Shihab Chottur from Malapurum who has undertaken Haj pilgrimage by walk was welcomed by the people of the community in a grand manner at Talapady on Thursday June 9.

Shihab had planned to travel 8,640 kilometres by foot, to reach Mecca in nine months. Several people who gathered in Talapady, welcomed him.

On Thursday afternoon, Shihab had a health check-up in Hosangadi. He took rest and then continued his journey. 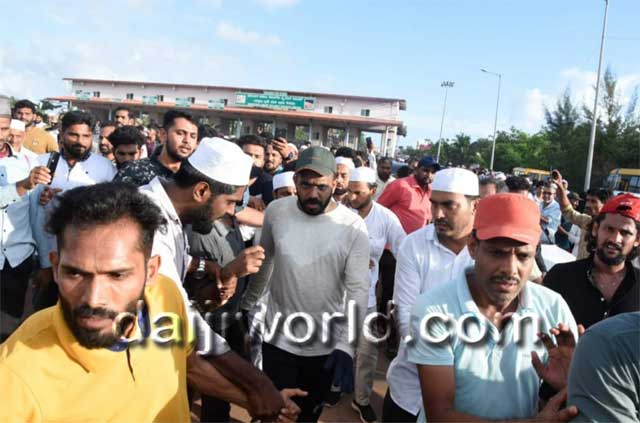 After performing Namaz in Beeri near Kotekar Masjid, the general public wished him best wishes for his long journey.

Several people thronged to welcome Shihab. People followed him from Talapady to Beeri. It was crowded making it difficult for Shihab to walk.

Shihab had planned to stay in Thaqwa Masjid in Pumpwell. But, as he could not reach the masjid on time, a huge crowd gathered around him during his walk. Hence, he had to stay in Hanafi Masjid in the night.