Udupi, May 28: BJP MP Patap Simha gave his opinion on various matters in the city on Saturday May 28. 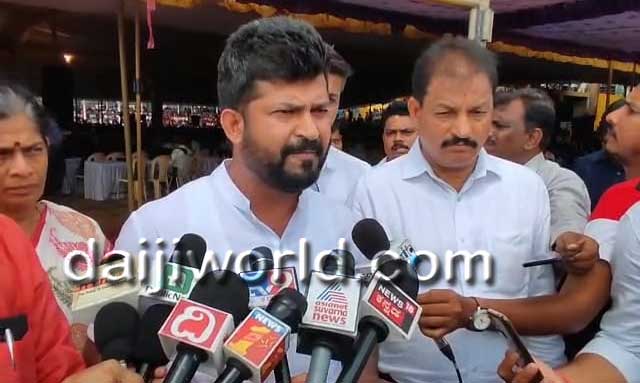 “Creating suspicion and making false propaganda is the aim of these people. Those who create unnecessary issues are eunuchs. They do not have any substance. They are just good for standing in front of the microphone and uttering nonsense. You come for discussion. Give evidence for omitting lesson on Bhagat Singh. Narayana Guru’s lesson is transferred from social studies to Kannada subject. Narayan Guru’s lesson is there in seventh standard syllabus also.

“Devanoor Mahadeva made false propaganda during election campaigning against me in 2014 and 2019. The verdict of people of that area is well known. Personally I have lots of respect for Devanoor Mahadeva. He has written wonderful book called ‘Kusumabale’. Mahadeva should give up creating rumours in favour of Congress party and take the pen and write excellent novels. We also like Devanoor Mahadeva and honour him. You have given rest to pen and standing in front of mike.”

Giving clarification on the issue of accusation on Rohith Chakrateertha that he has insulted regional song of Karnataka (Nadageethe), Pratap said, “I have come across this matter also. Someone posted this on Facebook saying that it was circulated on Whatsapp. Somebody played some mischief. That is wrong. That was not written by Rohit Chakrateertha. A case was registered when Siddaramaiah was the CM and B report is also done. A person is being targeted unnecessarily. Kuvempu was based in Mysuru. I am his fan and I respect him a lot. Attempt is made to show Rohit in a derogatory manner. It is not right to target anyone personally. They are not coming to public discussion even after giving invitation.”

Commenting on Hijab Part 2 issue at Mangalore University college, Simha said, “There is uniform in all schools and colleges around the world. The fight of MLA Raghupati Bhat that uniform should be implemented is absolutely right. Court has given strict orders to follow community guidelines. The court verdict needs to be respected. Mindset of honouring court’s advice should be developed. One should understand the verdict of the court before raising any issue. Problem arises when we think that our religion is greater than the constitution of the country.”

The thought and concept of freedom and independence was laid by Veer Savarkar, MP Pratap Simha said here on Saturday, May 28 at the Ajjarkad Grounds.

Participating at a function to celebrate the 75th year of Indian Independence, he said it is not possible to attain freedom through non-violence (Ahimsa) and fasting alone.

He said 63 nations had gained independence through a revolution. “Our history books find mention of these revolutions whereas in Indian history only Mughals and Delhi sultans find mention. Was there not any history in India before the advent of the Mughals?" he wondered.

He said, “Indians have forgotten the Cholas, Guptas, Rashtrakootas, Kadambas, Hoysalas, Cheras and Peshwas. The Indian national tricolour had Gandhiji's charaka in the middle and later replaced by Ashoka chakra by Veer Savarkar which will one day become Sudarshan Chakra.”

He said Veera Savarkar was a real freedom fighter as he fought for India's independence by undergoing the Kalapani punishment at the Andaman jail besides undergoing a jail term in Burma prison.

He said people who have lived in Pune palace cannot be called freedom fighters.