Mangaluru, May 13: A sudden fire that was noticed in a truck carrying HP cooking gas cylinders from Mangaluru to Udupi caused concern among public. However, the exemplary presence of mind displayed by locals near Hejmady toll plaza vicinity averted a major tragedy.

The truck driver had parked the vehicle near Hejmady toll plaza on the night of Thursday and went to nearby stall to have tea. During this time, fire was noticed underneath the truck below the seat of the driver. 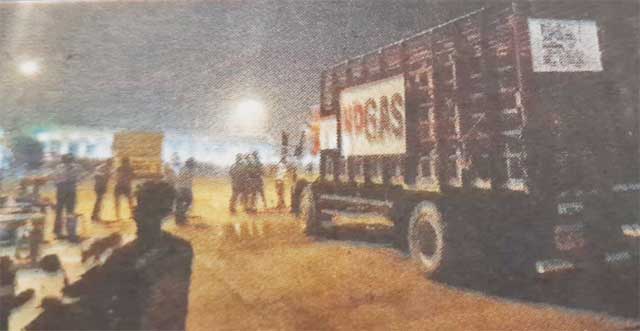 All staff of nearby petty shops, toll plaza personnel and locals poured water in buckets and put the fire off. Padubidri police station officer Purushottam and personnel also rushed to the spot. A fire service team of Udupi camped at the spot though fire was put off.