Beltangady, Jan 29: It is said that a lady officer of the forest mobile squad has been transferred to Bidar from here at the instance of local MLA Harish Poonja. The official has accused the MLA of effecting her transfer due to political enmity and in support of timber thieves. 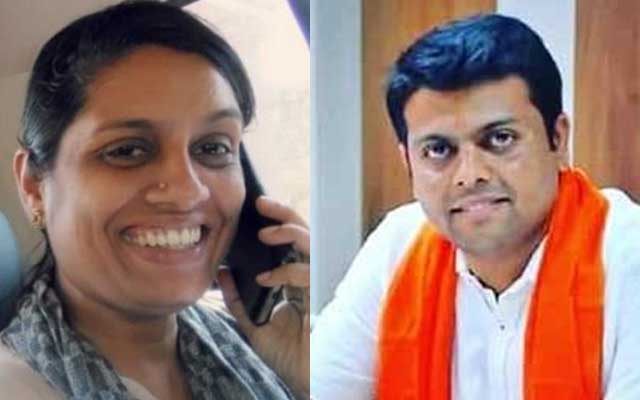 The transfer done at the instance of the MLA has caused heartburn even within the BJP. The transfer has also reportedly laid bare the cold war that was on between Beltangady MLA Harish Poonja and lady forest officer, who is the wife of Sachin Noojody belonging to reputed Billawa lineage and first family of Kutyaru Marigudi, Beltangady.

The lady officer has written to Sri Guru Narayana Swamy Seva Sangha on the issue. She said in the letter that Harish Poonja wrote to the chief minister on January 26, 2022 and saw to it that she got transferred to the forest training centre in Bidar district. She said that this is a transfer made because of personal rivalry and one-sided measure. She said that the MLA had an axe to grind against her as the forest department had seized timber and vehicles from timber smugglers from Beltangady taluk who had illegally felled trees in the taluk. She clarified that she had raided the spot and registered case against the illegal timber dealers on the basis of orders from her higher officers and such raids are a common occurrences in the department.

"Beltangady MLA Harish Poonja settled personal scores against me with the specific purpose of extending support to illegal timber transporter Balakrshna Shetty Badyaru and others. Even though I am a lady officer, I have been transferred to distant Bidar. Being a member of the Billawa Samaj, I request you to condemn this oppressive tactic and do me justice," she requested in the letter. This tussle between the MLA and forest officer has become viral in the social media. Many have also dubbed this is as a measure to intimidate a Billawa woman officer who did her duty in bringing to the open wrongdoings.

Some BJP leaders and MLAs from Udupi and Dakshina Kannada are said to be unhappy at the interference of the MLA and getting an upright official transferred by pressuring the chief minister. A faction of the party is also said to be unhappy. There is information that Soumya Naik, an excise official, who conducted several raids, was got transferred in the past from Beltangady to Humnabad, Kalaburagi in a similar case.