Bengaluru, Jan 27: The Karnataka Pradesh Congress Committee Chief D K Shivakumar on Thursday, January 27 promised to meet and talk to miffed senior party leader C M Ibrahim and persuade him to stay on as the Congress party needs him.

Speaking to media persons in Bengaluru, he said Ibrahim may have been hurt and feels ignored and must have spoken out of pain.

Reacting to Ibrahim’s comments, “My ties with Congress are over,” Shivakumar said Ibrahim was a senior leader and had served as a minister in the Congress government. 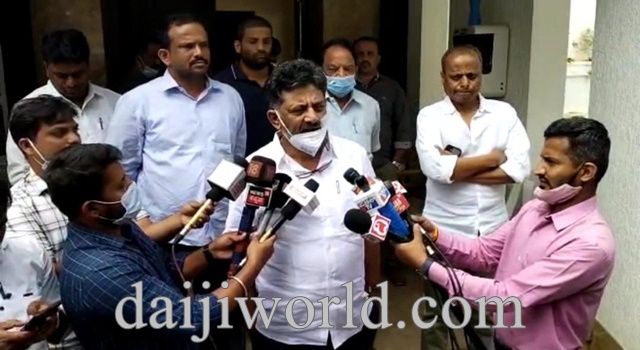 “When Siddaramaiah was the Congress chief minister, he (Ibrahim) was given the party ticket overlooking sitting MLAs. Even after his defeat in elections, he was given Cabinet rank and status as Deputy Chairman of the State Planning Commission. He was made MLC twice. He has worked for the party. He may have his grievances and unhappiness,” the KPCC Chief said.

C M Ibrahim is reportedly upset that Congress leader BK Hariprasad has been made the Leader of Opposition in the State Legislative Council ignoring him. He is said to be determined to resign as Congress MLC and join the JD(S) as he was quite close to former Prime Minister H D Deve Gowda and served as Union minister in the latter’s cabinet.

On Ibrahim’s statement that the Congress party is under the illusion of returning to power, Shivakumar said the Congress leader’s remarks should not be taken seriously. “I will meet him personally and discuss with him,” he said.

Shivakumar wondered how the State Government allowed the Bangalore Turf Club to conduct the Ultra Derby Bangalore Race at the Race Course when the general public are subjected to restrictions due to Covid pandemic and hotels, restaurants, bars and pubs as well as cinema houses are allowed to operate only to 50% of their capacity.

“I have already raised the issue and want to know what the State Government is going to do. Let the Chief Minister, Home Minister and Director General of Police look into this issue,” he said questioning the government’s decision of registering cases against Congress leaders for taking out the Mekedatu padayatra for a public cause.

“We will decide our future course of action based on the government’s decision. We will examine what to do and whether to approach the courts,” he said.