Byndoor, Dec 6: IRF Infrastructure Developers, which executed the national highway widening contract here, proved its insensitiveness towards the people's feelings, by towing away dead cows by using a towing vehicle. Two corpses of cows found on national highway 66 were dragged away by using a rope instead of loading them into the vehicle.

A video clip of a towing vehicle dragging away the dead cows has become viral in the social media. Hindu Jagarana Vedike (HJV) Byndoor unit has expressed anguish at the way IRB company handled the issue. It has termed the way in which the cows were towed away as ghastly. 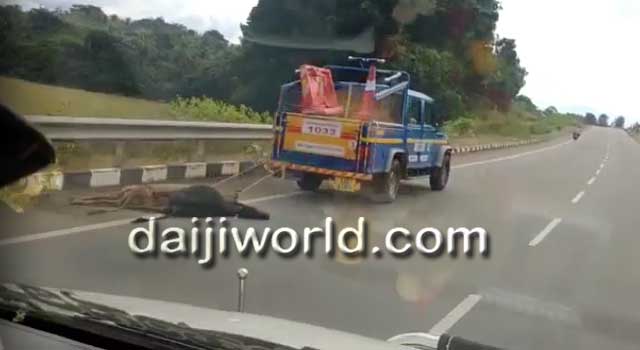 Screengrab from the viral video

The Vedike wondered whether this is an incident which has happened in Pakistan or Bangladesh. It said that the staff of Shiroor toll plaza 1033 staff should be ashamed of dragging away the corpses of holy cows in India where cows are treated as mothers and agriculture happens to be the prime occupation. It said those who did this heinous act will face the curse of the cows.

The organization pointed out that Hinduism gives special status to cows and in the Ashtamangala divine query organized at Kollur temple had provided the clarification that the cows should be worshipped first before worshipping others including the mother. It reminded the concerned that holy religious occasions begin with the puja of the cows.

"The holy cows are dying every day on the national highway because of the unscientific manner in which the work was executed by IRB company. Hindu activists and the people have all along been performing the funeral of the deceased cows as per religious procedures. To record our protest and to condemn the apathy and irresponsibility shown by the IRB company, all the Hindu organizations will join to hold a protest at 10 am on Monday," the organization stated.

A case is filed in Byndoor police station against the IRB officer and personnel for inhumanly dragging two injured cows by tying them behind their Bolero pick up vehicle. According to the complaint filed by Prashant Moily (28), a resident of Bankeshwara Byndoor village, he was travelling on NH 66 at 12 noon on Sunday, December 5. When he approached Belke of Bhatkal, he saw IRB officer Prafulla Kakade and other personnel of IRB dragging two injured cows inhumanly by tying their legs to the Bolero pickup van bearing KA 47 A 1370. The case is registered under Prevention of Cruelty against animals Act.