Bengaluru, Dec 2: Even as the countdown for the elections to the 25 seats in the State Legislative Council on December 10 has started, Karnataka Pradesh Congress Committee President on Thursday claimed that a strong pro-Congress wave has started in the State with leaders from BJP and JD(S) unconditionally joining the party.

Addressing a function at the State Congress office in Bengaluru on Thursday, the KPCC Chief said grama panchayat members and leaders from different districts were joining the party without any pre-conditions. 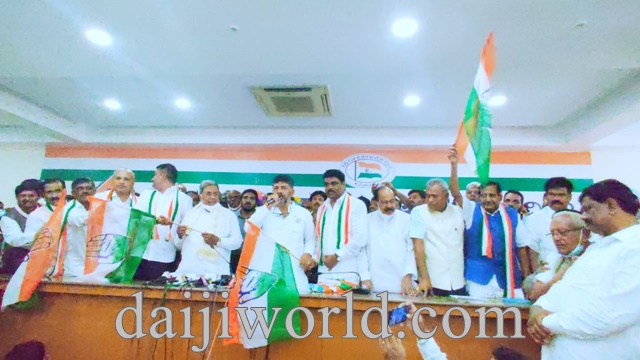 “There is no distinction in the party between the original members and newcomers in the party. All are equal in the party and all should work for strengthening the party without any reservations,’’ he said welcoming the new entrants.

Shivakumar said JD(S) leader C R Manohar, who was elected to the Council from the local bodies’ constituency from Kolar district, has resigned his seat to join the party and warmly welcomed Manohar, who has substantial followers in Kolar and Bengaluru Urban districts.

Another prominent leader, Malur Nagaraj, who joined the party from BJP, had served as Kolar district Congress president for 15 years, has returned to the Congress as he was disillusioned in the BJP, the State Congress Chief said.

The State KPCC Chief said the party will intensify its membership enrolment drive and activities after the Council polls on December 10 and the Belagavi session of State Legislature beginning on December 13 and requested all new entrants to become primary members of the party in their respective booths.