Puttur, Nov 27: Dakshina Kannada district, where communal sparks often get blown out of proportions, has of late been witnessing another set of incidents which might lead to communal hatred. The incidents are unfolding at the government PU college at Puttur Kombettu. Initially the friction had started between two groups of students over girl students, and now the incidents are slipping out of hand and are held on the streets by the clashing rival groups. 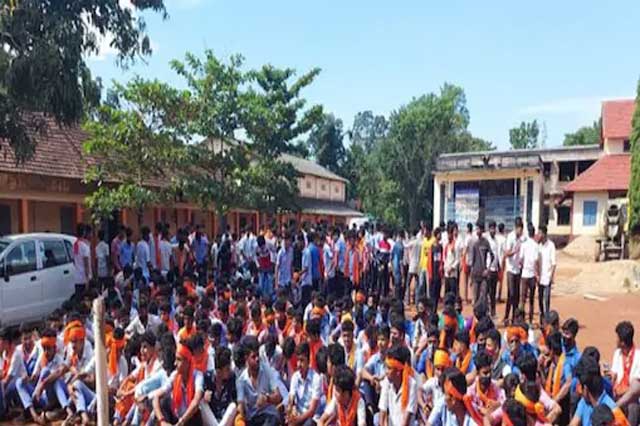 After the initial incident which happened inside the college campus, a group of students which was at the receiving end of the hostility inside the college had attacked the students who assaulted them at the government bus stand, Puttur. Students from both the sides got admitted into hospitals and filed police complaints against each other. In the meantime, leaders of an organization, siding with the group that was attacked, urged the principal to take action against the attackers. The principal has barred the students who assaulted the other group against attending college. Opposing this move, Akhil Bharatiya Vidyarthi Parishad led a protest of the government college students in the college campus.

After the protest, there was friction between the two groups of students. Two students got admitted into hospital. Condemning the series of incidents, organizations in support of Muslims have taken to streets now. They have been insistent that cases should be registered against the students accused of attacking the others. The workers of the organizations who came together in the town police station here have, through a memorandum, urged the police to undertake detailed investigation into all the incidents that have happened in the recent past.

Campus Front of India has accused the Sangh Parivar of harbouring communal enmity among the students. The organization has named Hindu leaders, Arun Kuymar Puthila and Chinmaya Ishwaramangala as being the forces behind these incidents. These leaders had held a meeting of students in the government college where the students were called upon to stop things like Love Jihad. Because of this, the students who participated in meeting have been often attacking students belonging to minority communities, it has said. It has also accused the police personnel of being silent in the matter

The police have been putting together information. Dakshina Kannada district superintendent of police, Rishikesh Sonawane, said that the police are scrutinizing the steps to be taken as the students involved in the above cases fall under the Juvenile Delinquents Act.