Riyadh, Nov 26: In a ghastly accident that took place on Al-Hijrah highway in the province of Madina in the Kingdom on Friday, November 26, between a bus and a truck, four people died on the spot.

The bus was transporting 45 people when it collided with a truck at Al-Yutamah, situated at a distance of 90 km from Madinah.

First aid was given to the injured people at the site of the crash before shifting them to the hospital. Kaled Al-Sehali, spokesperson for Saudi Red Crescent authority said that 20 ambulances and advanced care units from Madina rushed to the spot, along with eight units from Makkah and three from Qassim. 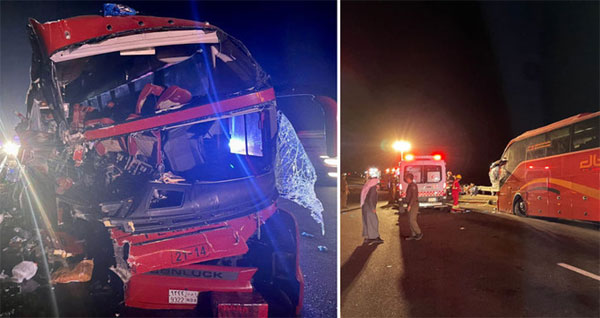 This route is extremely busy as pilgrims use the same for visiting the Prophet’s mosque and Grand mosque in Madinah.