Bengaluru, Oct 24: A number of labourers working for Namma Metro project had a narrow escape on Sunday October 24 as a heavy crane fell from a height of 40 ft. It is said that the negligence of the staff was responsible for this mishap.

Namma Metro Phase-2 work is going on between Silk Board and KR Puram. At around 6.30 am the machine that joins the segment snapped midway and fell. Labourers who were below escaped by a whisker. 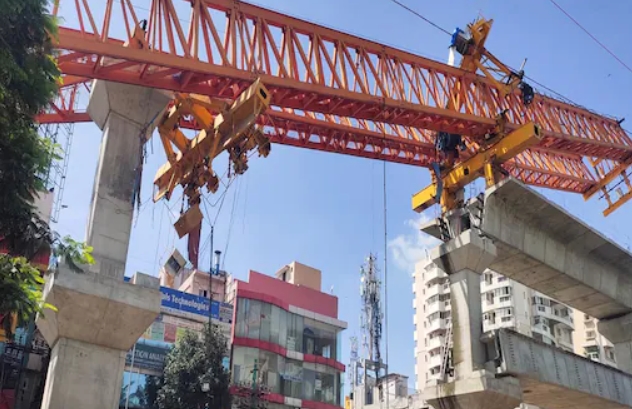 Though engineers visited the spot, Metro officials did not arrive even after six hours of the incident, media reports claimed.

On September 22, chief minister Basavaraj Bommai had personally witnessed the drilling machine emerging after drilling a tunnel at Shivaji Nagar Metro station during the second phase work of Namma Metro. The machine had drilled a tunnel of 855 meters in the Kalena Agrahara-Nagawara route.

Speaking to reporters, Namma Metro MD Anjum Parvez said, "This is the first time such a mishap took place during phase 2 of the Namma Metro work. The broken launcher cannot be used again. There is a possibility that the work will get delayed by two or three weeks because of this incident. However, we will still manage to complete the work within schedule. We have already ordered an inquiry into the mishap."

Last month, there was a landslip at Tannery road at the site of Kottigere to Nagavara Metro work. The owners of the land had accused officials of BMRCL as being responsible for the incident.