Mangaluru, Oct 23: The number of people undertaking cage aquaculture has exceeded 1,500 now. The increasing interest of the fishermen to undertake cage fish farming, which initially began ten years with a solitary unit in Uppunda in Byndoor taluk, can be evidenced by the fact that a large number of people have filed applications under the Matsya Sampada scheme. 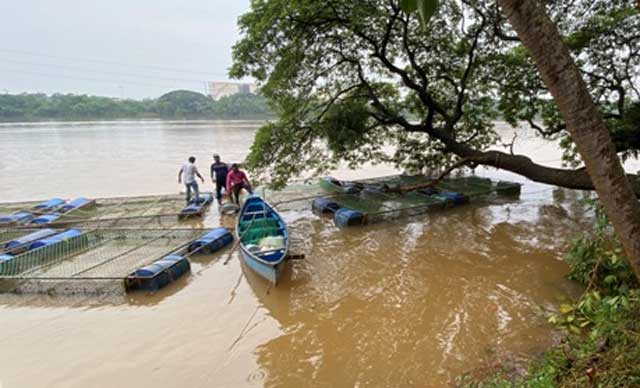 Cage aquaculture is nothing but creating cages inside the river with the help of nets and raising fingerlings there. Fisheries department joint director Ramacharya Puranik, says that an interim report has been received, and further steps will be undertaken after the full report is received.

If there are a large number of cages, natural flow of water in the river will get obstructed. If the fishes get washed away due to floods after they grow, the fishermen will lose heavily. The study is undertaken to avoid these things. Under this scheme, women get 60 percent and men get 40 percent subsidy to set up these units which cost about three lac rupees.

Babu Kharvi, a cage fish advisor, says that about three lac rupees will have to be spent for fabrication work, fish food etc and out of a thousand fingerlings, even if 500 survive, in nine months, one tonne of fish is produced. If it is sold at Rs 400, the income is four lac rupees and one lac rupees would be the net earning, he points out.