Mangaluru, Oct 18: The heavy rainfall caused in the coast on account of fall in atmospheric pressure in the Arabian Sea and Bay of Bengal has delivered a deadly blow to paddy cultivators from the coast. Farmers who raised paddy crops for the kharif season are now clueless about the future.

The paddy seedlings are formally planted in June and the first week of July. The crop is ready for harvest in October. This is the time when paddy corns break out of the stalks and the stalks begin to get heavier. Even a little rain can spell doom for the crop. For the last four days, coastal Karnataka has been receiving rainfall. Thousands of acres of paddy plants which are ready for harvesting have been shoved to the ground by the rain. In the cases where the crops are harvested, the harvested plants are lying drenched either in courtyards or fields. 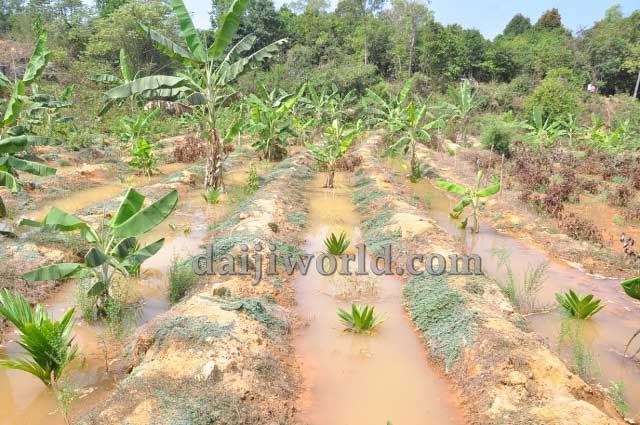 In Dakshina Kannada district, 11,747 hectares of land has been brought under paddy cultivation whereas in Udupi, 35,726 hectares are under paddy cultivation. In the state as a whole, paddy is grown in 12.4 lac hectares of land. The rain has already devastated the paddy crop. If it continues, the paddy stalks might start to germinate, the farmers of coastal districts are worried.

Because of the high cost of labour, lack of government encouragement etc many have moved from paddy crop to cash crops. For the last two decades, this shift has been seen on a regular basis. If the situation continues, there will be a shortage of rice for boiled rice manufacture.

A progressive farmer, Oswald Fernandes, who also is the district Raitha Sangha president, has expressed the apprehension that people who undertook cultivation of barren land for the last two years, may lose their interest because of the untimely rain. He also says that in many places, areca nuts which had fallen down were washed away by the rainwater.