Kundapur, Oct 18: During the previous season, thousands of fishes raised through cage aquaculture had died under mysterious circumstances in Byndoor and Kundapur areas. Before the bitter memories of these deaths were forgotten, fishes grown through cage fishing have started dying in Panchagangavali river. This development has caught the fish growers unawares.

From the last three days, death of a few fishes here and there was witnessed. On Sunday, the deaths saw a quantum jump. The entire cages are getting vacant due to the mass deaths. Hundreds of cages have been installed from Sangam area of Panchagangavali area till Bobbukudru. Several fishes which had reached a weight of one kg have also died. The families which depended on cage fishing for a living are now burying the dead fishes and their financial resources have dried up. 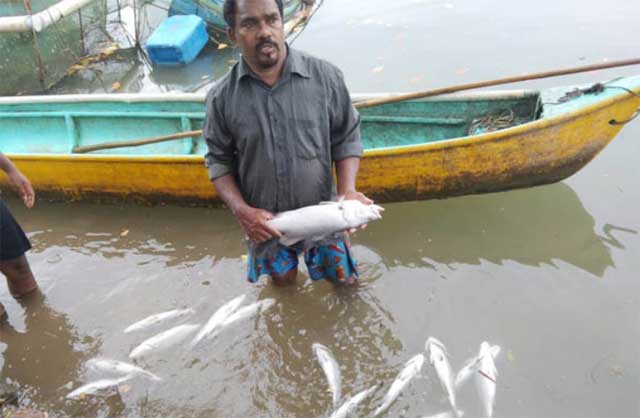 Those engaged in cage aquaculture have accused hotels, hospitals and complexes of releasing untreated effluents directly into the river as a result of which they say that the oxygen content in the water falls, resulting in the fishes suffocating to death. The rule that effluents of hotel have to be treated before being released into the river is not being followed. Likewise, hospital waste including chemicals reaches river water which poses risk not only to the cage fishes but also other aqua creatures. The underground drainage project is stranded midway and the problem of polluted water may not get a solution at least for now.