Mangaluru, Oct 16: The poem prescribed for class 2 English subject by the Education department has courted controversy.

The poem ‘Go not to the temple’ adapted from Rabindranath Tagore’s writings in the text book has irked the pro-Hindu organizations. The organizations accuse that the programme depicts Hindu religion and traditions in a derogatory manner and will affect the mind of young children. 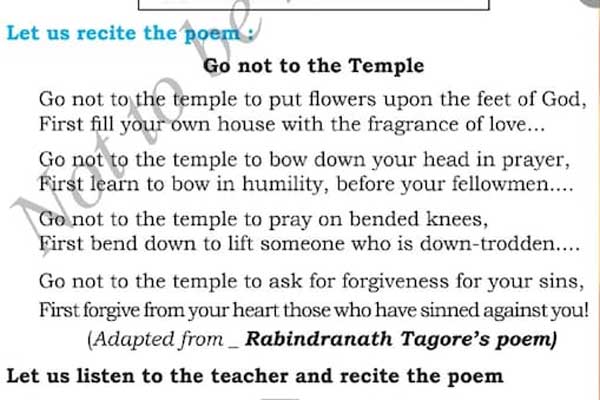 Parents of students also accuse that this poem that should be prescribed to adolescents is not right. Hindu organizations say that only the temple is mentioned in the poem and if the education department indeed wants to instil secularism in children, let it also make mention of church and mosques and make modifications in the poem.

This text book for class 2 is prescribed for students by the textbook revision committee headed by litterateur Baragooru Ramachandrappa. Though many days have elapsed since the publication of this text book, the specific page that contains the poem is going viral on social media. Hindu organizations which have come to know about the poem have urged the state BJP government as well as the education department to withdraw the poem immediately.

Reacting on the issue, Muralikrishna Hasanthadka, provincial convener of Bajrang Dal said, “Processes of this kind in which Hindu religion is portrayed in a derogatory manner are going on unabated. Now text books read by young children also contain such poems. The state government should immediately take action on the same. The controversial poem should be withdrawn from the text book immediately. Otherwise Bajrang Dal will stage a state-wide protest.”

Sunil, parent of a class 2 student said, “There is no need for young children to learn these matters. Attempts to teach the ideology that needs to be prescribed for adolescents, should not be done with young minds.”

Social media is also abuzz with criticism on the attempt to malign Hinduism through schools.