Mysuru, Oct 16 (IANS): Karnataka Chief Minister Basavaraj Bommai on Friday inaugurated the Dasara procession of 'Jumbo Savari' by performing a puja at the Balarama Gate of the Mysuru Palace. Bommai also paid floral tribute to the idol of goddess Chamundeshwari along with other dignitaries.

People from across the state watched the celebrations of the final leg of 'Jumbo Savari', the Dasara grand event, which was celebrated as a low-key affair in the backdrop of the Covid-19 pandemic. 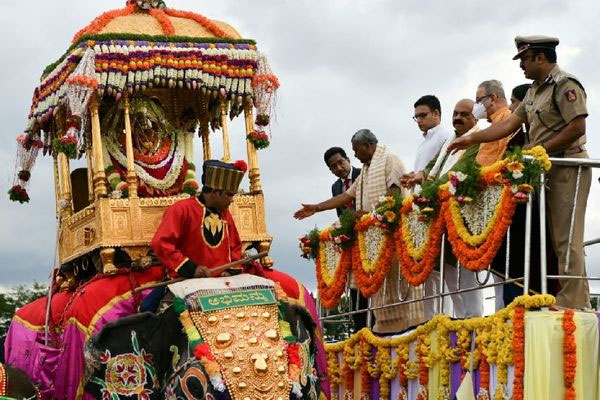 The entry for common people was banned. As per the government decision, only 500 people were allowed to participate in the event. Eight cultural troupes and six tableaux were part of the procession, along with police personnel.

Chief Minister Bommai said that since a large number of tourists are visiting Mysuru, the illumination of the Mysuru Palace and other major junctions will be extended for another nine days.

"I have prayed to god for the prosperity of the state and well-being of the people," he said.

Dasara elephant Abhimanyu carried the idol of goddess Chamundeshwari placed inside a golden 'howdah', with other elephants walking along with it.

The festivities were inaugurated by former Karnataka Chief Minister S.M. Krishna on October 7 atop the Chamundeshwari hill.