May 2: The counting for the crucial elections in West Bengal, Tamil Nadu, Kerala, Assam and Puducherry began at 8 am on Sunday May 2. The elections saw a high-pitched battle amid a strong second wave of the deadly coronavirus, with cases soaring to record numbers every day over the past few weeks.

The BJP is seeking to make inroads into West Bengal, a state that has so far evaded the party. The exit polls predict a close race between the BJP and the ruling TMC. The BJP hopes to win a second term in Assam and has allied with the Asom Gana Parishad and the UPPL (United People's Party Liberal). The Congress campaigned hard, but exit polls again favour BJP. While the party has gone to polls on it own in Kerala, in Tamil Nadu, the BJP has allied with the ruling AIADMK. In Kerala the incumbent LDF is hoping to win re-election, while the Congress-led UDF is the other main alliance. In Tamil Nadu the Congress has allied with M K Stalin's DMK, as during the Lok Sabha polls. In the neighbouring Puducherry, a Union Territory having just over 10 lac voters, the fight for the 30-member Assembly was majorly between the Congress-led United Progressive Alliance (UPA) consisting of Congress, DMK, CPI, VCK and an Independent and the National Democratic Alliance (NDA) comprising of All India N R Congress, BJP and AIADMK. 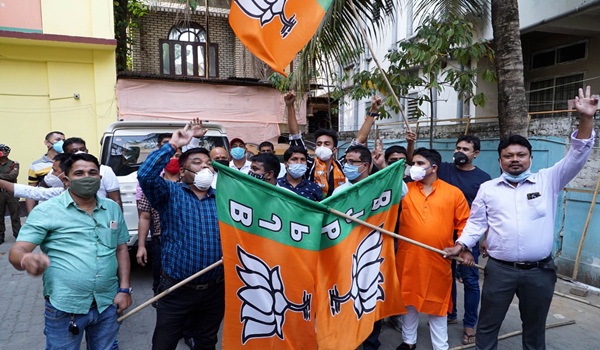 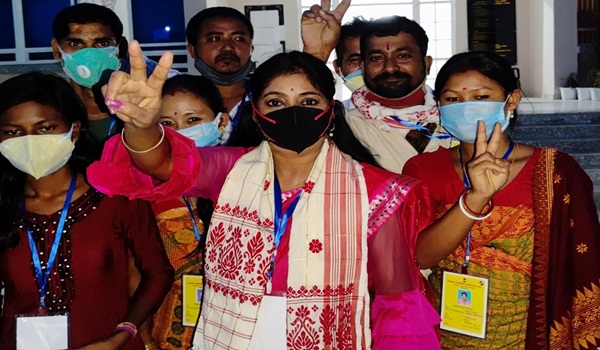 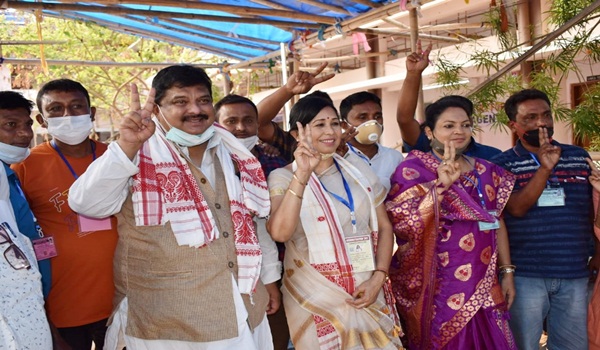 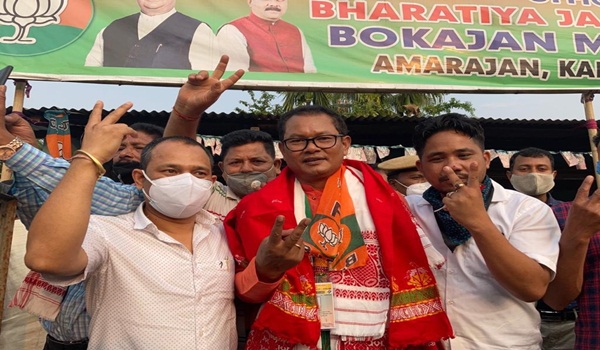 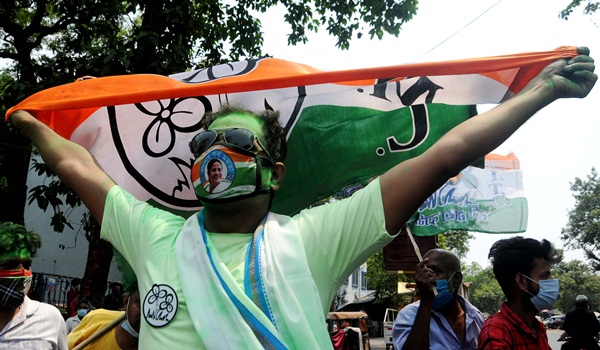 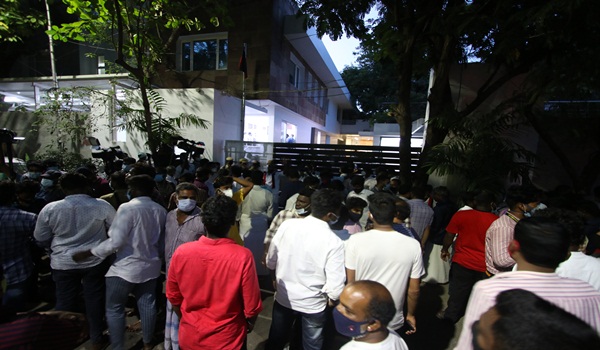 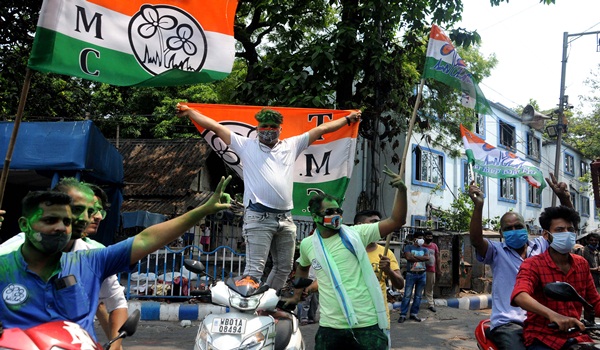 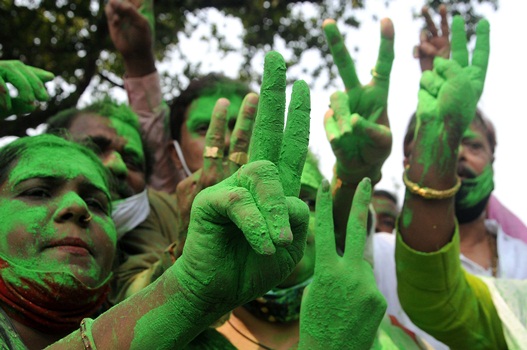 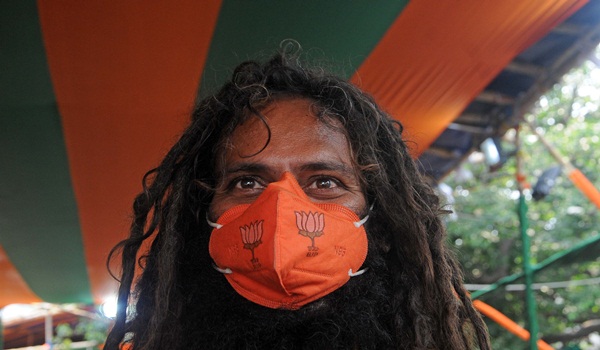 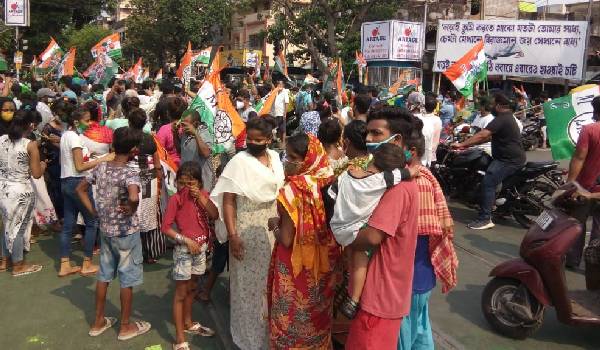 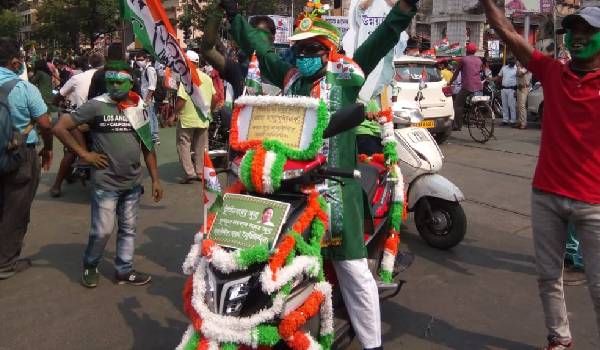 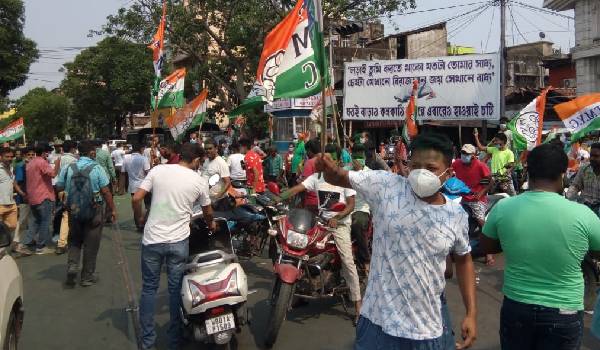 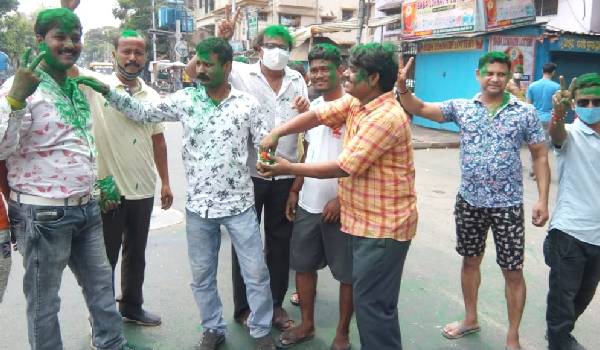 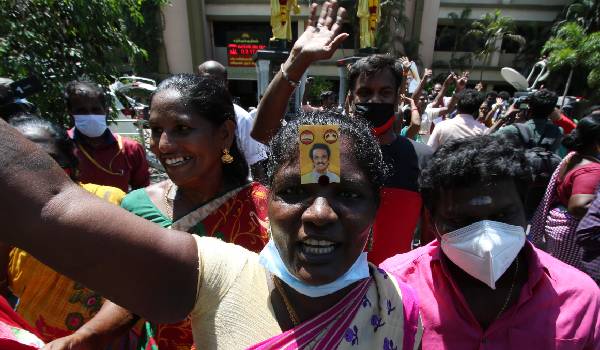 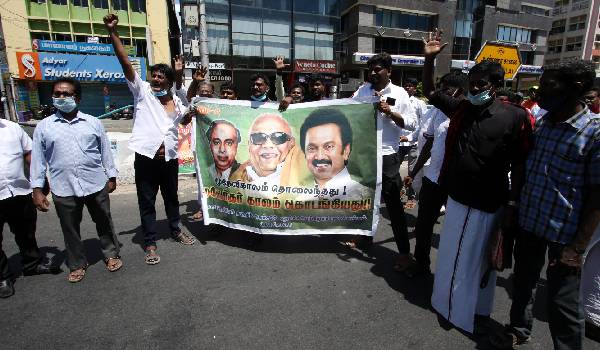 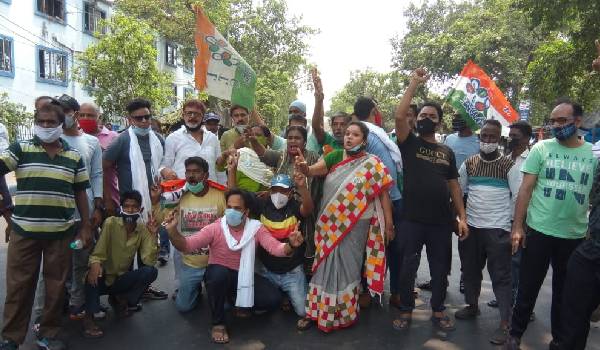 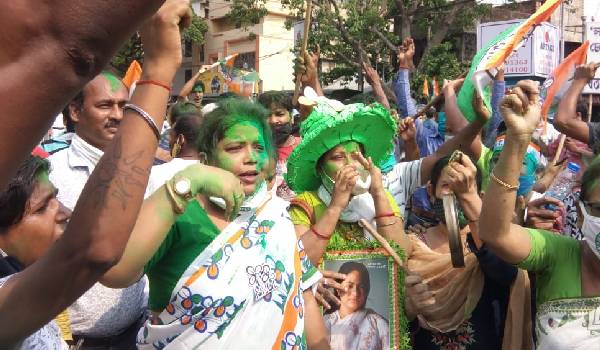 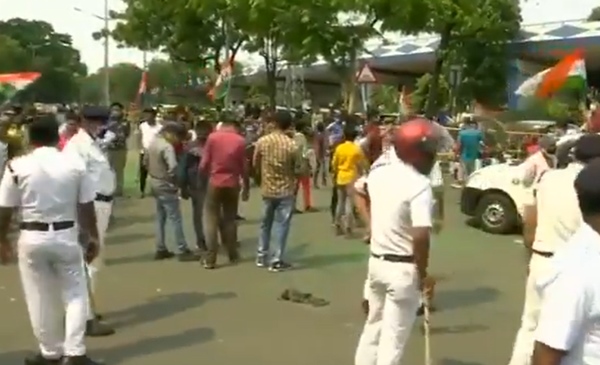 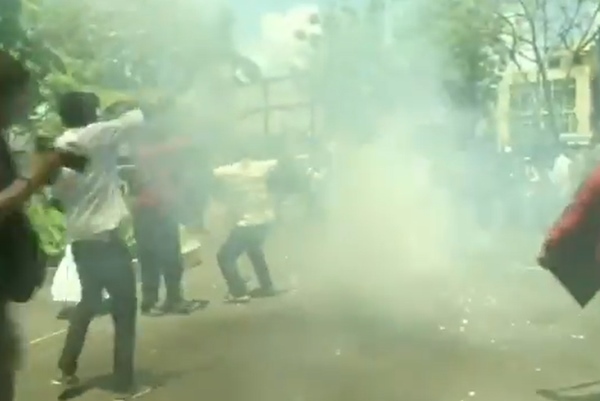 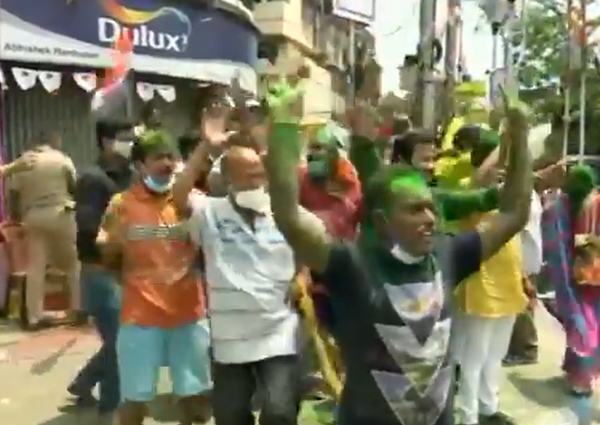 Though the incumbent Trinamool Congress (TMC) has managed to pull off a massive win with the party winning as many as 126 seats so far and leading in 92 other seats, the party supremo Mamata Banerjee has lost her own seat in Nandigram to BJP's Suvendu Adhikari by over a 1,000 votes. The incumbent chief minister accused the Election Commission of being BJP's 'spokesperson' and said that though the EC had declared her winner, it retracted and gave away the victory to the BJP. The trends available from different sources indicate that Trinamool Congress is leading in 178 of the 292 seats while the BJP is leading in 108 seats. United Front - an alliance of Left Front, Congress and the newly formed Indian Secular Front, is leading in rest of the 6 seats.

There was no election in two assembly constituencies as the respective candidates died before the polls. Presently the counting of postal ballots is going on where mainly the government officials on election duty and voters above 80 years of age exercised their franchise.

There is one aspect which can make chief minister Mamata Banerjee happy. As counting of the postal ballots show Trinamool having an edge over the BJP, it is also indicative that the government employees who turned their face away from the ruling party are showing signs of coming back into the Trinamool fold. In the last Lok Sabha elections, on the basis of postal ballots, the BJP was ahead in 41 of the 42 Lok Sabha seats.

However, the early trends show that Chief Minister Mamata Banerjee is trailing in Nandigram assembly constituency to BJP's Suvendu Adhikary. According to the latest reports, Adhikary who left Trinamool Congress and joined the BJP just before the election, is leading with a margin 1,492 votes.

On the other hand, BJP heavy weights like Locket Chatterjee, Swapan Dasgupta, Mukul Roy have been leading from their constituencies but Babul Supriyo has been trailing behind TMC's Arup Biswas from Tollygunje constituency.

Guwahati, May 2: The ruling BJP-led NDA is heading to retain power in Assam for the second time in a row as the alliance is leading in 68 seats in the 126-member assembly for which three-phase polling ended on April 6.

According to the Election Commission's initial trends of the results, the ruling Bharatiya Janata Party alone is leading in 51 seats while its ally Asom Gana Parishad (AGP) in ten seats and United People's Party Liberal (UPPL) is leading in seven seats. The opposition Congress has established initial leads in 21 seats while its partners Bodoland Peoples Front is leading in two seats and All India United Democratic Front (AIUDF) in nine seats. An independent candidate is leading in one seat.

Congress Legislative Party leader and his deputy Debabrata Saikia and Rakibul Hussain both are trailing from Nazira and Samaguri seats respectively.

The counting of votes for 126 Assembly seats in Assam for which polling was held in three phases began on Sunday morning in 34 districts amid tight security and all Covid-19 Standard Operating Procedures (SOPs).

Assam Chief Electoral Officer (CEO) Nitin Khade said counting of votes are being held in 50 Election Districts (34 administrative districts) and there are three tiers of security put in place in and around the counting centres and adjoining areas. "To maintain Covid protocols and guidelines issued by the Election Commission, numbers of counting halls have been increased by 131 per cent -- from 143 in 2016 Assembly election to 331 this time," the CEO said.

Chennai, May 2: With the DMK-led alliance in the lead in a majority of Tamil Nadu's 234 Assembly constituencies, party cadres have started to assemble at the party headquarters here.

The party cadres are visibly happy as DMK is expected to maintain the lead and finally win the poll to capture power in the state after a gap of 10 years.

According to Election Commission data, the DMK is leading in 117 seats, while of its allies, Congress leads in 13 seats, the CPI, the CPI-M and the VCK in two seats each, taking the tally to 136 seats, as against the halfway mark of 118 seats.

On the other hand, the AIADMK-led alliance is leading in 89 seats, as per Election Commission data.

DMK President M.K. Stalin and his son Udhayanidhi Stalin are comfortably leading in their Kolathur and Chepauk-Thiruvallikeni seats, respectively.

Thiruvananthapuram, May 2: Kerala Chief Minister Pinarayi Vijayan, off late addressed by many in the social media as 'Captain', seems set to justify the title by creating history by leading the Left Democratic Front to its second consecutive victory, a feat which bucks an over 40-year-old trend in the state's electoral politics.

The Left's stunning performance can be attributed to no one other than Chief Minister Vijayan who led from the front.

In the 2016 polls, it was party stalwart V.S. Achuthanandan who led from the front and after the Left won, Vijayan stepped in to take the Chief Minister's post, while Achuthanandan was given the post of 'Kerala Castro'.

Vijayan, despite running into numerous troubles in various issues, stood his ground and boldly went forward. His writ ran large when it came to selecting party candidates, with seven ministers and 26 legislators left out.

Even with a few rounds of counting left, senior Congress leader and MP Benny Behanan said they accept the verdict and will sit down to find out what went wrong.

The leads are on the lines of the exit polls had predicted a victory for the Left, with few of them giving it over 100 seats while sticking to a minimum of 75.

The Congress-led UDF, which had swept the 2019 Lok Sabha elections, will have to do a lot of introspection as they were banking on a backlash against the Left from the Hindu women voters, especially those who are devotees of Lord Ayyappa, over Vijayan altering the traditions of the Sabarimala temple in 2018. After getting knocked out at the 2019 Lok Sabha polls, Vijayan decided to wait for the apex court directive and then decide.

Likewise, the UDF also expected a backlash against the government from the fishing community which has its presence in around 50 constituencies, after Vijayan was forced to cancel an agreement with a US-based company for deep sea fishing.

That is only turning out to be the nemesis of state Fisheries Minister J. Mercykutty, who is trailing as counting entered the final rounds.

Also, its new ally Kerala Congress-Mani's leader Jose K.Mani, son of late legendary K.M. Mani whose party was in the Congress-led UDF till last year before switching over to the LDF, was trailing in Pala, represented by his father for over half a century.

What will be painful for him is a few of the other candidates from his party are leading.

Among the giant losers at the moment include seven-time legislator P.C. George, presently an independent candidate.

It only remains to see if the LDF will end up with three digits, by crossing 100 seats.

Chief Minister Pinarayi Vijayan's statement that the Bharatiya Janata Party, which had won one seat in Kerala in the 2016 Assembly polls, would see its account getting closed this time, has come true with the Centre's ruling party failing to secure any victory despite fighting hard in three constituencies.

In the 2016 Assembly polls, veteran BJP leader and former Union Minister O.Rajagopal had won the Nemom Assembly constituency in the Thiruvanthapuram district, getting the BJP its first-ever seat in the state.

As counting started on Sunday, the BJP was leading in three seats - Nemom, Palakkad and Thrissur.

At Nemom, former BJP state President Kummanam Rajasekheran was maintaining a lead till the last few rounds when former CPI-M legislator V.Sivankutty, who lost to Rajagopal the last time, breezed past him. In the process, Congress MP from Badagara K. Muraleedharan, who was asked to take on the responsibility to prevent the BJP repeating its victory, came a poor third.

Sivankutty won with a margin of over 5,000 votes.

But the major upset was the loss of 'Metroman' E. Sreedharan in Palakkad. Leading right from the time counting started, he, however, lost steam in the last few rounds and eventually his Congress rival and Youth Congress President Shafi Parambil completed a hat trick of wins by a margin of 3,840 votes.

Malayalam superstar Suresh Gopi, presently a nominated member of the Rajya Sabha, also fought hard at Thrissur and at a few times, was leading, but at the end he had to settle in the third place after giving both the traditional rivals a few frights.

Now, all eyes are on the vote share of the BJP and certainly heads are expected to roll as its state President K.Surendran had to bite the dust in two constituencies where he contested - he came second at Manjeswaram and third in Konni.