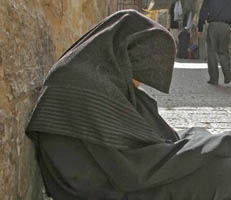 Jeddah, Jul 22 (Agencies) : Saudi police arrested an Arab man for begging although he had in excess of SR1.2 million (Dh1.2 million) and an expensive four-wheel vehicle.
Police said the unnamed man,  a resident of a nearby Gulf country, is visiting the Gulf kingdom on a tourist visa with his wife and three children, adding that he was found to be staying in a luxury furnished apartment in the Western Saudi port of Yanbu.
“We found large sums of cash with him and receipts for bank deposits…he had a total of more than SR1.2 million and an expensive four-wheel car carrying plates issued from another Gulf country,” police spokesman Colonel Fahd Al Ghannam said, quoted by the Saudi Arabic language daily Okaz.
“We also found that he is staying with his family at a luxury furnished apartment…he was arrested after he was caught begging in the street.”
Begging in strictly banned in Saudi Arabia and other Gulf oil producers. A large number of beggars, mostly foreigners, have been arrested and deported by these countries.