Advani role in government to be decided later: Gadkari 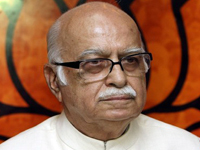 New Delhi, May 14 (IANS): With the BJP confident of forming a government, party leader Nitin Gadkari said Wednesday that a role for veteran L.K. Advani will be decided "at an appropriate time".
Gadkari, party president Rajnath Singh and senior colleague Arun Jaitley are set to meet BJP's prime ministerial aspirant Narendra Modi in Gandhinagar Wednesday.
Asked what role Advani will play in a new government, Gadkari said: "Atalji (Bihari Vajpayee) and Advaniji are our founder members, our most senior leaders. The party's parliamentary board will take an appropriate decision at an appropriate time (about Advani).
"The guidance of Advaniji is very important," he added.
Asked if talks were being held with BJP's allies over government formation, Gadkari said: "There are no talks ... yet. We have not discussed anything and have not even thought about it."
He said the party was "confident of (securing) a majority" in the Lok Sabha and those who want to support it were "welcome".
Gadkari has also met another party colleague, Sushma Swaraj.

Title: Advani role in government to be decided later: Gadkari