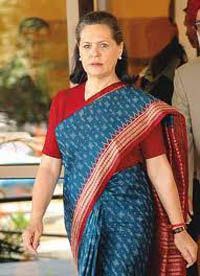 New Delhi, Nov 9: Congress chief Sonia Gandhi on Wednesday November 9 broke her long silence on corruption and Lokpal issue when she virtually attacked Anna Hazare in her written speech at a public rally in Uttarakhand.

Sonia Gandhi was supposed to address the rally on Wednesday, but due to her ill health (viral fever), she cancelled her visit at the last moment. But her speech was read out by union defence minister A K Antony.

"Despite repeated assurances by the Prime Minister Dr Manmohan Singh and the Congress party on its comittment to bringing a strong and effective Lokpal bill, why is there so much hue and cry? Why are there repeated threats?" she asked, targetting Anna for blackmailing the central government on Lokpal bill issue every now and then.

“Everyone needs to look within.... You cannot eradicate corruption like this that one thinks corruption by us is a holy affair while that by others amounts to corruption. This is what is happening these days,” Sonia hinted at Team Anna, whose members are facing corruption allegations.

"Corruption cannot be eradicated by merely making speeches or by pointing a finger at others," she stressed.

“There is a lot of talk about corruption these days. No doubt corruption is prevalent in society in some form of the other. An atmosphere needs to be created against it. Corruption will not go by merely making speeches, by pointing a finger at others. Everyone needs to look within,”  Gandhi said.

"Corruption cannot end by pointing fingers at others. Everyone should introspect. It cannot end if some think their corruption is better than others. This is what is happening these days. I want to ask these people who gave RTI? Who brought transparency in public life? We did," she said.

Gandhi also expressed concern over rising prices, which she felt, was hitting the common man hard and said the government must take steps that provided relief to the common man.

This, she said, “can happen only with the support of both the Central and state governments.” Ms. Gandhi said, “I admit that the government also has a lot of difficulties and this problem is there in almost all the countries. But when the whole world was passing through economic recession, we remained untouched.” The Congress president also felt that the hill state has a lot of potential for tourism, agriculture and floriculture and asked the state and central governments to work jointly and initiate necessary steps in this direction.

Attempting to woo women in poll-bound Uttarakhand, Gandhi said she was impressed by the women of the hill state. “You may call it discrimination, but I feel the social and economic system of the state has endured due to the hard work and dedication of the women in the state,” she said.

She also reminded the people that her government has initiated many measures to make them financially independent.

She said to strengthen their voice on the ground, the government had granted 50 per cent reservation for women in panchayati raj institutions also.