Mangaluru/Bengaluru, Dec 1: Fight against love jihad is making waves throughout the state including coastal region. Right-wing organizations have released posters in this respect and are urging Hindu girls to be alert.

Photo of Aftab, accused of killing his live in partner Shraddha in a barbaric manner are displayed on the posters and there is appeal to Hindu girls not to fall victim to love jihad. 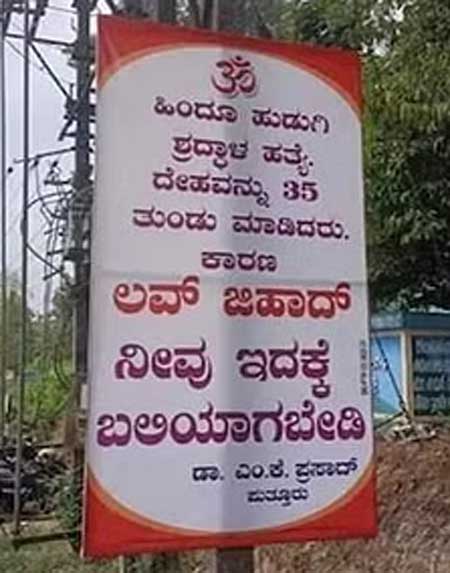 Pro-Hindu organizations are going to hold state-wide campaign from December 11 to 17 urging separate law to deal with love jihad issue. They are urging that this issue should be taken up in the Belagavi assembly session.

Meanwhile, pro-Hindu posters are put up in Puttur urging for law against love jihad. The poster says that Shraddha was killed by Aftab and made into 35 pieces because of love jihad.

Hindu organizations including chief of Sri Rama Sene Pramod Muthalik are urging for anti-love jihad law. Pramod Mutalik has urged Hindu girls not to fall victim to the fake game of love jihad of Muslim youths.

Mohan Gowda, state spokesperson of Hindu Janajagruti committee said, “Incidents like Shraddha murder are increasing. Asha of Mangaluru changed her name to Ayesha and turned into a terrorist. A big dragnet of love jihad is spread throughout the country. Hindu girls are enticed into it. We urge the BJP government to implement separate law against love jihad in line of that prevails in Uttar Pradesh.”