Beltangady, Dec 1: A man, who went to attend a Mehendi programme did not return home and his mortal remains were mysteriously found in Guruvayanakere pond of Kuvettu village on November 30.

The deceased is identified as Praveen Pinto (37), a resident of Shivajinagara Mane of Kuvettu village, who was an auto driver by profession. 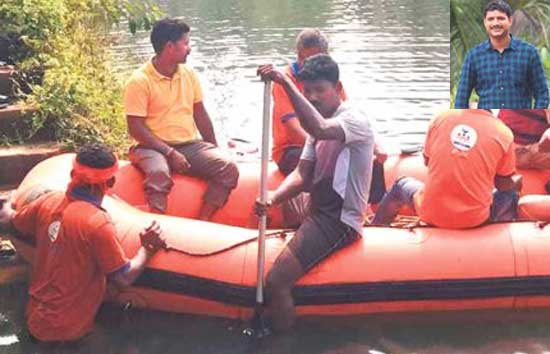 Search for mortal remains in progress and Praveen Pinto (inset)

Praveen had told his wife that he was going to attend a mehendi programme in the night on November 29 near Amar Jaal of Odilnala village. When wife called Parveen at 1.40 am on November 30, he said that he will be at home in a while but did not return home. His driving licence and other documents of the vehicle were found near Guruvayanakere pond on November 30 morning.

Police, fire service personnel and volunteers of Shaurya disaster management unit searched for Praveen’s body in the pond right from the morning. Later, diving experts were called and the body was brought out of the pond at 2 pm.

As the family members of Praveen expressed suspicion on the death of Praveen, his body is sent to a private hospital in Mangaluru for post mortem.

Praveen’s wife is seven months pregnant and he also has a six-year-old son.

According to police, Praveen called one of his close friend seconds before dying and said that he is ending his life.

Praveen’s wife Reshma Juliet Lobo says that she is aware of verbal altercation between Pradeep Shetty and deceased Praveen that occurred at the Mehendi function. Around 3 am on November 30, a car had also arrived near the house of Praveen. The red t-shirt which Praveen was wearing is also missing. So she has asked for a thorough investigation.

A case in this connection is filed in Beltangady police station.