Manama (Bahrain), Nov 29 (IANS): An Indian poultry farm worker, who was stuck in Bahrain due to a massive wage-cut since the Covid pandemic, finally returned home with the help of the Indian Embassy and support groups.

Ramasamy Govindan, 52, who hails from Tamil Nadu's Kallakurichi district, came to Bahrain 25 years ago and was working as a supervisor in a poultry farm, a social media post by Annai Tamil Mandram, a voluntary forum for Bahraini Tamils, reported on Monday. 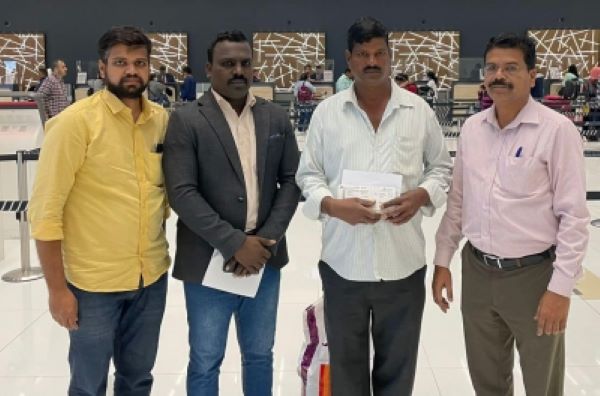 During the pandemic period, Govindan was not paid a proper salary -- a large part of which he sent back home to support his family.

When his employer refused to renew his visa, Govindan approached the Indian Embassy in Bahrain.

"Arrangements were made to file a case as per the instructions of the Indian consular officer, but as he (Govindan) did not have sufficient documents, the effort did not bear fruit," Annai Tamil Mandram said in a statement.

The forum supported Govindan with his daily needs for the last six months and also helped him with documentation work needed to secure his release back home.

After struggling for more than six months, Govindan was sent home on November 26 with much-needed help from the Indian embassy and the Tamil forum.

"We express our sincere gratitude to all those who have helped in the case, big or small," Annai Tamil Mandram said in its statement.

Indians constitute the largest expatriate community in Bahrain with about 350,000 of them in the Kingdom.

They are preferred due to their work ethics, integrity and apolitical approach, according to the Indian Embassy in Bahrain.

Majority of Indian community members are from Kerala (about 200,000) followed by Tamil Nadu (about 50,000) and rest from Maharashtra, Goa, Punjab, Uttar Pradesh and Rajasthan.

As per the embassy data, over 65 percent of the Indian expatriate workforce is employed in the construction, contracting and maintenance sectors.