Karnataka BJP launches all out attack on opposition leader Siddaramaiah

Bengaluru, Nov 24 (IANS): The ruling BJP in Karnataka has launched an all out attack against Opposition leader Siddaramaiah.

BJP leader N.R. Ramesh has also lodged a complaint against the senior Congress leader with Lokayukta alleging a loot of Rs 400 crore worth of properties in Bengaluru in the pretext of denotification. 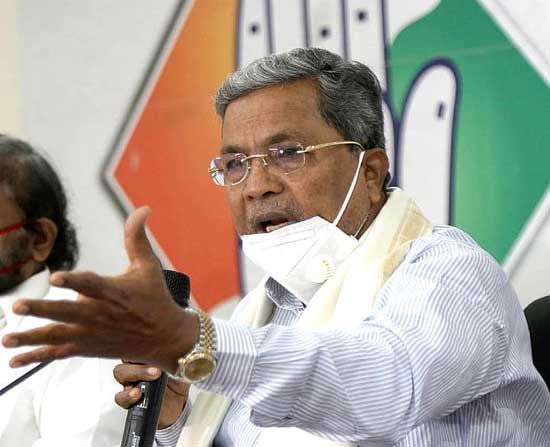 The development comes as Siddaramaiah is also making efforts to project himself as the Chief Miniserial candidate if the Congress comes to power in the 2023 Assembly elections.

Meanwhile, he has also continued his attacks on the RSS, Hindutva and BJP.

The comments over Brahamins by one of his aides has stirred a controversy. Siddaramaiah himself apologised and clarified that he is not against any community.

Though being a veteran leader, Siddaramaiah is still searching for an Assembly constituency to contest in polls. Sources explain that the fear of party insiders to ensure his defeat in assembly elections is the reason behind it.

But former Chief Minister B.S. Yediyurappa, without taking Siddaramaiah's name, said that "a Congress leader is dreaming of becoming the Chief Minister".

"But, it is going to remain as a dream of a beggar who will never get fortune," he added.

Minister for Transport Sriramulu chided that Siddaramaiah has no choice of an Assembly constituency to contest elections. "He is like a pardesi (outsider)."

He also launched an attack that people defeated the sitting Siddaramaiah in the 2018 Assembly elections from Chamundeshwari assembly constituency.

"He managed to register victory over me in Badami constituency by mere 1,600 votes," Sriramulu said, adding: "The person who was Chief Minister in 2018, now in 2023 is still searching for a constituency to contest elections."

Meanwhile in his complaint against Siddaramaiah, N.R. Ramesh alleged that Siddaramaiah and his team had taken Rs 600 crore worth property in the pretext of de-notification.

"The prime government property in Bengaluru had been gobbled up by Siddaramaiah and his team in collusion with bureaucrats."

He also claimed that Siddaramaiah took the opinion of a legal cell officer tactfully and facilitated Rs 400 crore worth property to be taken by private parties.

"I have requested Chief Minister Basavaraj Bommai to initiate a probe in this regard also."