Bengaluru, Nov 22 (IANS): The cooker bomb which exploded in an auto rickshaw on the outskirts of Mangaluru city on November 19, had the capacity to explode a bus, investigations revealed on Tuesday.

According to sources, the cooker was filled with extremely powerful gel. 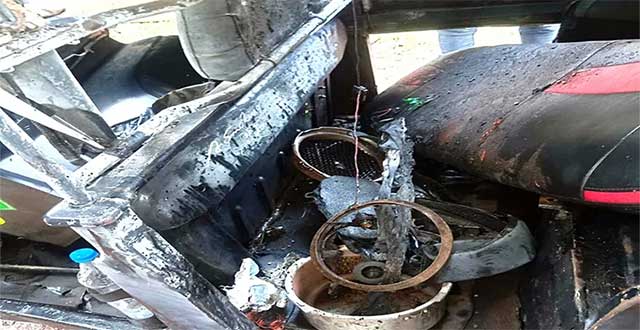 The device had a detonator along with a plus and minus connecting unit. While it went off, the power connection to the detonator failed. The gel had caught fire and thick smoke emanated from the auto following the low-intensity blast.

Had the bomb exploded to its full capacity, the auto would have turned into a mangled heap damaging other vehicles on the road leading to loss of lives, as per the preliminary investigation of the Forensic Science experts.

Earlier in the day, Chief Minister Basavaraj Bommai said that the National Investigation Agency (NIA) is already working on unearthing connection with the national or international terror groups.

"No doubt they had targeted us. We have taken it seriously. Karnataka police had caught 18 sleeper cells and sent terror suspects to the Tihar Jail.

In spite of that they are trying to have control. They are carrying out activities with the cooperation of neighbouring states. This is an issue of national security. The original name of the arrested suspected terrorist, his connections, identity was tracked within 24 hours, CM Bommai explained.

Mangaluru Police Commissioner N. Shashikumar stated that the health condition of the auto driver Purushottam Poojari has improved. He also visited suspected terrorist Mohammad Shariq who is being treated in Kankanady hospital.

He clarified that the CCTV footage in which two persons are found to be roaming is not connected with the case and the persons seen in the footage are passengers.

Meanwhile, SDPI, considered the political wing of the PFI, has ruled out any link with the blast.

SDPI State General Secretary Bhaskara Prasad clarified that there is no connection with the cooker blast case and the Social Democratic Party of India (SDPI). "Some time ago an incident of explosion had taken place in Mangaluru. First it was claimed to be an act of terror. When the suspect's name turned out to be Aditya Rao, the case was projected as an act of a mentally unstable man," he said.