Puttur, Sep 24: This year the paddy sowing was done late as the monsoon did not arrive in the month of June. Though all preparations were done in the first week of June to plant the saplings, delay in monsoon forced the agriculturists to postpone the same. Now after one and half months of planting the saplings, the head worm disease is an issue of concern to the farmers.

The worms are seen on the top of the paddy saplings. If this spreads to crops that are in the developing stage, the crop will surely get destroyed. In most of the places, this disease is seen in paddy fields that are in low lying areas. Only pesticide spraying will prevent the disease. But to spray the pesticide, rain needs to stop. Some have already started spraying as rain has been almost absent for some days. 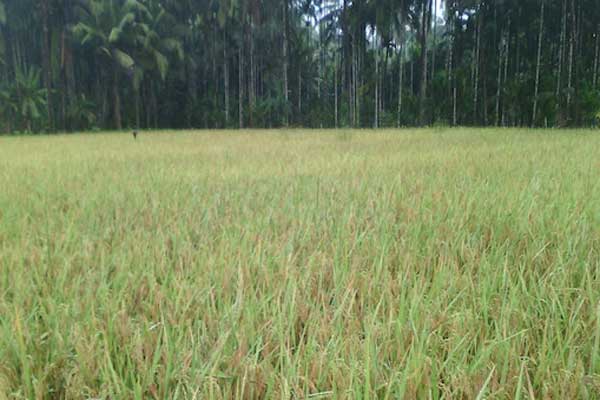 The head worm disease appears due to excessive amounts of rainwater that fills the paddy fields, which causes slime and results in head worms. It starts from paddy fields that are filled with water and later spreads to others. If the disease is seen in paddy fields that are on elevated areas, it spreads quickly to low lying area fields as the water flows. This disease literally dries the crop.

Very few people are continuing the farming work these days. Generally during Ganesh and Navratri festivals, the crop is brought from the field and stocked in the houses. However, this year stocking is not done as the crops have not grown still.

Agricultural officer Humera Zubin says that the head worm disease can be brought under control by mixing one ML of Quinalopos to one litre of water and spraying it to the paddy fields. As much as 200 litres of solution is required for an acre of field.