Udupi, Aug 2: The temporary check posts that were installed under the limits of Hiriyadka to monitor the illegal activities of sand mining and transportation are lying unused now.

In the summer of 2019, 2,200 metric tonnes of sand, which was extracted from the Baje dam of Swarna river, was kept as stock in the temporary storage centre on Bommarabettu gram panchayat grounds. These check posts were installed after spending thousands of rupees to prevent illegal mining and transportation of sand. But now the check posts are lying vacant as sand mining in the district has completely stopped. 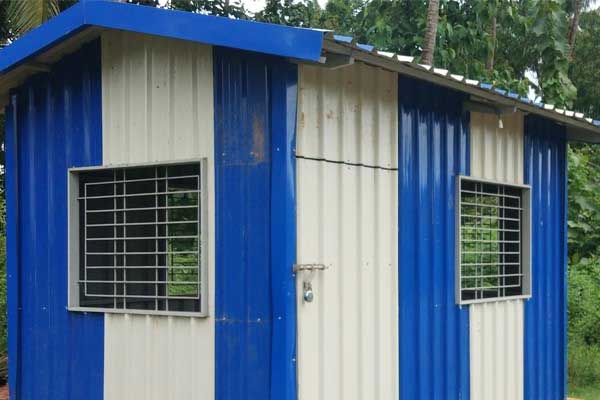 Barbed wire fencing was done all around the ground to stock stand. In addition, five CCTVs and geo-fencing were installed. Mining and geology department had installed four check posts near Puttige bridge, Hiriyadka Kotnakatte, near Kukkehalli-Baje dam cross and near Hiriyadka Devadiga Sababhavana. Deputy commissioner G Jagadeesha had informed earlier that revenue and police department will work in shifts in these check posts.

Now the check posts are locked for many months. Plants have covered some of the check post sheds. During monsoon, drunkards consume alcohol near these sheds till late at night. Locals urge that district administration and geology department has to take corrective action to prevent these sheds from being misused by anti-social elements.

Ganeshraj Saralebettu, a social worker said, "Checkposts were installed in order to monitor the movement of vehicles transporting sand. At present, they have become non-essential. These sheds have become spots for drunkards."

Gautam Shastri, an officer of mines and geology department said, "These sheds were installed on a temporary basis to monitor the sand transportation from the Baje dam. These will not be left unused. They will be utilized in the coming days. They can be shifted to other spots."