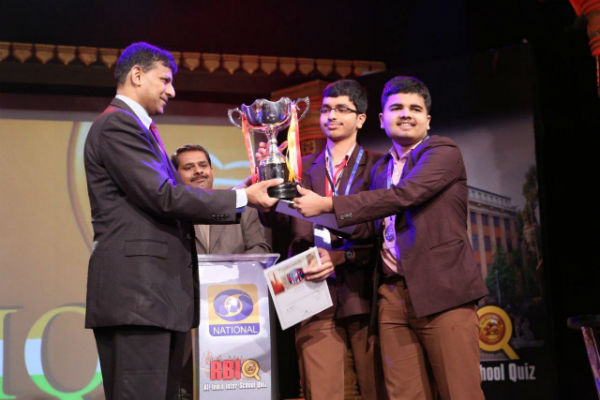 RBIQ is an annual all-India Inter-School Quiz launched by the Reserve Bank of India in 2012. It is one more important effort of the Reserve Bank towards spreading awareness about financial matters, especially among children.

RBIQ was held in 62 different locations across India for students in classes 9th, 10th, 11th and 12th. More than 10,000 students from 5,000 schools participated. The number was significantly higher than last year when, from 42 centres and 3,000 schools, 6,000 students had participated. Giri 'Pickbrain' Balasubramaniam was the quizmaster and Doordarshan was the media partner for 2014.

Dr Raghuram Rajan, Governor, Reserve Bank of India presided over the finals and gave away the prizes to the winners of RBIQ 2014. Dr Rajan said he was amazed at the knowledge that the young students had today. Information, he added, was available at the click of a mouse and pointed out that “It is how you stitch the pieces together that gives you the winning edge." He congratulated the winners saying he was thoroughly impressed with their knowledge. "We have been at the Reserve Bank for a while now. But I must say we did not know many of the answers," Dr Rajan confessed.

The finals will be telecasted from 10 am to 11 am on December 25, 2014. There will also be repeat telecast of all the episodes on Doordarshan’s Sahyadri satellite channel.