Matar stabbed Rushdie on August 13 in a New York education and spiritual centre as he was preparing to participate in a discussion on creative freedom in the US. 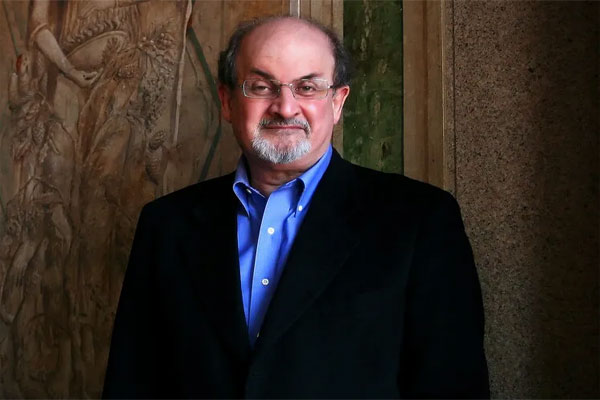 Rushdie was flown by a helicopter from the centre in Chautauqua to a hospital in Erie, Pennsylvania, where he was put on a ventilator and underwent surgery for wounds to his neck, liver, arm and eye.

The Daily Mail reported on Sunday that the Indian-born author's son Zafar said he has recovered enough to speak and was his "feisty and defiant" self.

ABC News reported that photos of Soleimani and Abu Mahdi al-Muhandis, the leader of Iraq's pro-Iranian militia movement who was also killed in the 2020 drone attack, were found on Matar's phone.

IRGC is a branch of the Iranian military that operates domestically and internationally, including in Iraq and Syria.

Ayatollah Khomeini, the late Iranian Supreme leader, put a death fatwah on Rushdie in 1989 because of his novel, "Satanic Verses", which he considered blasphemous, and Iranian groups have put a bounty of over $3 million on him.

While there has been no official reaction to the attack on Rushdie, the adviser to the Iranian negotiators for a nuclear deal, Seyed Mohammad Marandi, tweeted: "I won't be shedding tears for a writer who spouts endless hatred & contempt for Muslims & Islam. A pawn of empire who poses as a Postcolonial novelist."

But trying to distance his regime from Matar, he also asserted it was "odd" that "this happens" as the US, the other permanent members of the UN Security Council, Germany and the European Union were near a potential deal to revive the agreement that former President Donald Trump had junked to limit Iran's nuclear programme in return for lifting sanctions against it.

In remarks to the Daily Mail, Matar's mother Silvana Fardos indicated he probably got radicalised during a trip to the Middle East

After a 2018 visit to Lebanon, from where his parents emigrated, Fardos found Matar "was becoming more religious and he would criticise her for not giving him a strict Muslim upbringing", the Daily Mail said.

Their home in Fairwood in New Jersey, about 50 km from New York City, was searched by the Federal Bureau of Investigation, who confiscated books, a computer, a Playstation and knives, she said.

Fardos said that when he returned from a visit to Lebanon to visit his father, from whom she is divorced, the once outgoing and popular Matar was a "moody introvert" and locked himself in the basement refusing to let them in.

Matar was born in the US and grew up in Cudahy in Los Angeles.

Fardos said: "I don't care about politics, I'm not religious. I was born a Muslim and that's it basically. I didn't push my kids into religion or force anything on my son."