Bengaluru, Aug 13 (IANS): Ruling BJP in Karnataka on Saturday demanded an immediate apology from Congress MLA and spokesperson of Karnataka Pradesh Congress Committee (KPCC) Priyank Kharge over his remark that young men have to bribe and young women have to sleep with someone to get government jobs in the state.

"Thousands of women, talented, educated pass exams with struggle and get jobs. Mr Priyank Kharge, don't you think you have insulted all those women with your words? Apologise immediately," BJP Karnataka unit said in post on its social media handle. 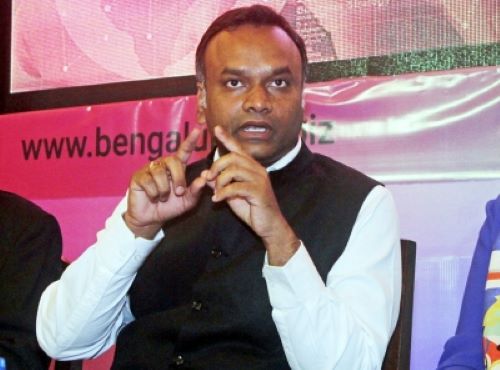 "There are secret CDs, tales on nightlife of so called Congress leaders. Mr Junior Kharge you will find it difficult to defend if the dual face of Congress leaders who pose to society as good leaders is exposed," the BJP said.

The BJP claimed that Priyank Kharge, son of Rajya Sabha Opposition leader Mallikarjun Kharge, "does not know that his house is not in order".

"When he (Priyank) is levelling allegations on BJP, the corruption scandal of Jayamala, former minister in Congress government has come out in the state," the BJP said.

Attacking the ruling BJP in Karnataka at a press conference on Friday, Priyank Kharge had said that the state government's achievement in creating employment in the state for the last three years is zero. The BJP is not filling the vacant posts, he alleged.

"To get government jobs, the young women will have to go to bed and men will have to bribe in Karnataka." He demanded a probe by the Special Investigation Team (SIT) into recruitment scams and Fast Track Courts (FTC) have to be set up," Priyank Kharge had said.

"A minister had asked a young woman to sleep with him to get a government job and later resigned when the scandal broke out. It shows how the ruling BJP is functioning in the state," Priyank Kharge had alleged.

He alleged that a deal has been done for a total of 600 posts and there is a scam to the tune of Rs 300 crore with posts of the Karnataka Power Transformation Corporation Limited (KPTCL). About 3 lakh candidates have applied for posts and the BJP is playing with their future, he had alleged.