Kiev, Aug 12 (IANS): Rafael Grossi, head of the International Atomic Energy Agency (IAEA), said that there is "no immediate threat" to safety at Ukraine's Zaporizhzhya nuclear plant despite continued shelling, but the situation could however change "at any moment".

While addressing the UN Security Council on Thursday, Grossi called on Moscow and Kiev to grant international experts access to the plant as quickly as possible, reports dpa news agency.

"I am personally ready to lead such a mission," he said. 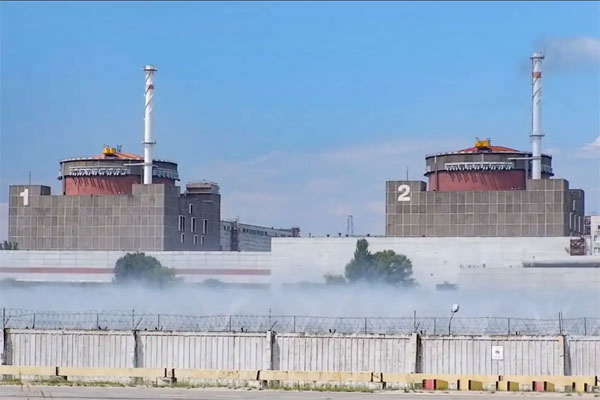 The US also called for an expert trip. "This visit cannot wait any longer," US Under Secretary of State for Arms Control Bonnie Jenkins told the council.

After the meeting, he emphasised the fact that no country on the 15-member Council had blamed Russia for the attacks on the plant.

Just hours before the session convened at Russia's request, the Zaporizhzhya plant in southern Ukraine, the biggest in Europe and among the world's largest, was attacked with heavy artillery and rocket launchers, according to a representative of the Russian occupying forces, Vladimir Rogov.

The information could not be independently verified.

Ukraine's energy operator Ernohoatom said there were 10 hits in the area, but that the situation at the plant remained under control with radioactivity no higher than usual.

The plant located in the city of Enerhodar was shelled several times and partially damaged last weekend, but its critical infrastructure was said to be intact.

Ukraine accuses Russia of using the plant as a stronghold for attacks, while the pro-Russian separatists accuse Ukraine of shelling the plant to get the West to intervene.

Rogov rejected calls from the G7 to return the plant to Ukrainian control, saying "that would be like giving a hand grenade to a monkey".

Ukrainian President Volodymyr Zelensky meanwhile said Russia was holding the Zaporizhzhya nuclear power plant hostage and using it for blackmail, in comments via video link at the start of a Ukraine donor conference in Copenhagen.

Zaporizhzhya is the third largest nuclear power plant on Earth, he noted as he warned of the risk of a disaster bigger than Chernobyl in 1986.