Udupi, Aug 6: Kannada and Culture and Energy Minister V Sunil Kumar took a dig at the 'forced' hug between D K Shivakumar and Siddaramaiah in a rally at Davanagere.

Speaking to reporters he said the hug between the two leaders looked forced, unreal and cold which is already out in the open. Sunil Kumar predicted that the hug or the camaraderie between the two Congress leaders will not last long and will end in a divorce. He also said one has to wait and watch to know when the divorce will happen eventually. 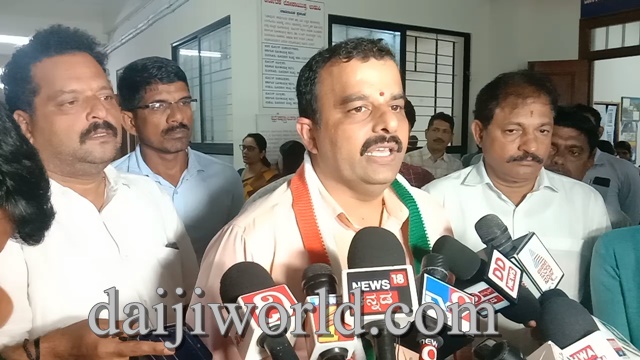 Referring to the Praveen murder case, the minister said the killer does not hail from Kerala as has been already disclosed by home minister. He said the police department has been given full powers to nab the culprits who are said to be locals. He said two or three accused have been arrested but the prime accused is yet to be arrested expressing the hope that it would happen in a day or two.

On the Har Ghar Tiranga campaign, the minister said, “In Udupi, four lac and in Dakshina Kannada six lac flags will be hoisted atop their homes. Sunil Kumar said the government had already sought co-operation in this regard from the public and institutions. Flags will be distributed from August 9 and officially on August 13 the Indian tri-colour will be hoisted atop homes. He called upon the public, shops and business establishments to hoist the national tri-colour with enthusiasm and fervour.

Sunil Kumar said starting August 13 all the five centres of Rangayana will stage plays pertaining to Indian freedom struggle and independence. He said Rangayana did face shortage of funds owing to the outbreak of Covid-19 pandemic adding that he had requested the finance department to release additional funds for Rangayana which the department had readily agreed to do.

Referring to the controversy of Hindi being used to write Har Ghar Tiranga in the website of the Kannada and Culture department the minister said there is no need to create any controversy or confusion as this is a campaign that is being run throughout the country.