Mumbai, Aug 3 (IANS): A delegation of Opposition leaders led by Leader of Opposition Ajit Pawar on Tuesday called on Governor Bhagat Singh Koshyari and urged him to declare a 'wet-drought' in many of the flood-ravaged Vidarbha and Marathwada regions.

The delegation submitted a memorandum to the Governor with a list of demands to expedite relief to the farmers and villagers hit by the fury of floods.

"The government must announce an assistance of Rs 75,000/hectrare to all farmers affected by heavy rains or floods and immediate aid of Rs 1.50 lakh/hectare to all farmers who have suffered damages to their fruit orchards," said Pawar. 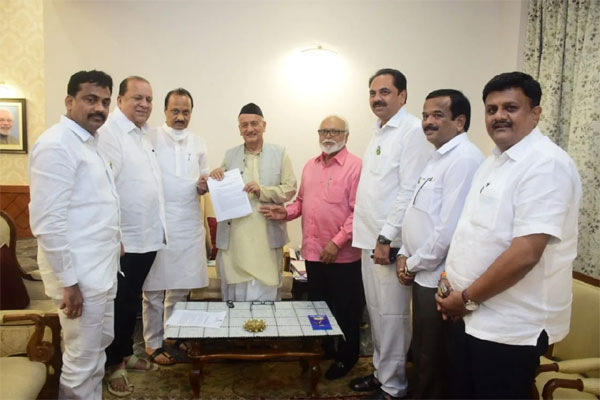 The Opposition demanded waiver of education fees for all students in traditional and professional colleges in these areas for the academic year 2022-2023.

Since a large number of farm labourers in Vidarbha-Marathwada region are on the verge of starvation due to lack of work and wages since the past two-three weeks, the government should consider their plight and provide a one-time help to them.

Pawar said that paddy is the main cultivation of the people in the tribal areas and the erstwhile Maha Vikas Aghadi (MVA) had extended subsidies to the tribals last year, and urged the present government to provide similar subsidies on priority even this year.

The Leader of Opposition recounted his experiences during the 4-day tour of the flood-hit regions when he witnessed farmlands eroded or washed out and covered with silt, making the lands infertile and unfit for agriculture for several years and concrete measures must be taken restore these lands at the earlier with adequate financial assistance.

The flood waters accumulated in fields and orchards has led to massive damage to cash crops like soyabean, sugarcane, bananas and other fruits resulting in a crisis of sowing this year and the farmers must be given options for re-sowing in a short span during the current crop season, said Pawar.

Many drinking water and agriculture wells have collapsed, washed out or got exhausted due to clogging and they must be allowed repairs under the government scheme of MNREGA.

Ditto is the situation with drip irrigation with the irrigation sets washed out in the floods, many have been damaged and the farmers should be given subsidies to reinstall them on an urgent basis.

Besides a large number of domestic and farm animals have been washed away or perished, and help must be given to their owners on priority.

There has been a huge damage to the roads and bridges infrastructure in the Vidarbha-Marathwada regions with most rural, district and other major roads in a terrible condition that has left many villages cut off from the local administration and urged these roads to be repaired by the government.

The Opposition delegation also demanded urgent repairs to the collapsed power distribution system, the crisis arising out of loans availed by the farmers for the Kharif season and demanded a complete waives of these debts, rebuilding the damaged or destroyed homes and barns of the villagers, plus the schools, colleges or government buildings that have been hit in many areas.

Pawar has also slammed the government of Chief Minister Eknath Shinde and Deputy Chief Minister Devendra Fadnavis for the huge delay in expanding the cabinet that has left the state administration paralysed and neglecting the immediate needs of the flood-hit farmers and villagers.