Mumbai, Jul 22 (IANS): The Maharashtra government on Thursday vacated the 'stop work' order on the contentious car-shed for the Mumbai Metro 3 at the Aarey Colony.

The stay was given by former Chief Minister Uddhav Thackeray, barely 24 hours after he assumed office on November 28, 2019, later declared around 800 acres of land in Aarey Colony as 'forest' and planned shifting the car-shed to a new site in Kanjurmarg.

The latest development came days after Thackeray had appealed "with folded hands" to the new government of Chief Minister Eknath Shinde and Deputy Chief Minister Devendra Fadnavis on its proposed move. 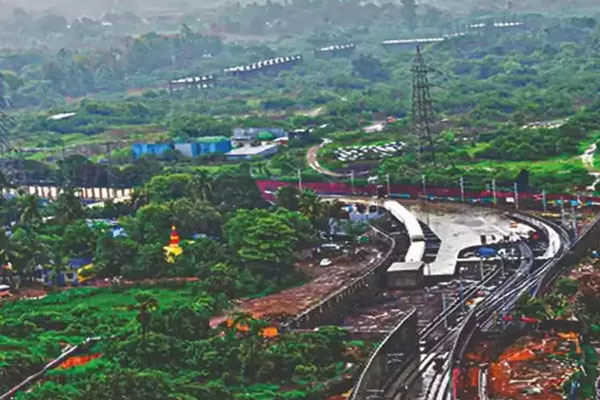 Shinde said that completing the Mumbai Metro 3 Colaba-SEEPZ line and the car-shed are crucial for the commuters of Mumbai and will help cut down pollution.

He said that nearly 17 lakh people will take advantage of the metro line saving time and fuel costs.

Defending the move on Thursday, Fadnavis pointed out that 25 per cent of the car-shed work on the Aarey Colony site has been completed and the rest can also be completed swiftly.

He added that the Aarey Colony proposal was cleared by the Supreme Court and all other hurdles were also removed.

"I had requested Uddhav Thackeray to keep aside his ego and allow completion of the work (at the Aarey Colony), the SC had approved the site as the Metro project would benefit the environment. So now the car-shed will come up in Aarey," said Fadnavis, terming the Kanjurmarg move as ecologically and economically unviable.

Recently, Fadnavis had alleged that the opposition to the Aarey Colony car-shed by environmentalists and activists was 'politically motivated with vested interests', especially when one-fourth of the project work was completed.

The Shinde-Fadnavis duo had announced the move spiking the Kanjurmarg site in favour of Aarey Colony on June 30, hours after they took oath.

The decision resulted in protests at the Aarey Colony by environmentalists, Congress, Nationalist Congress Party and Shiv Sena accusing the new regime of attempts to destroy the 'green lung' of Mumbai for financial gains.