Speaking to media persons in Hassan on Wednesday, June 22, the former chief minister asked why ED wants to interrogate Rahul Gandhi continuously for five days when it has all the documents. The interrogation can be finished in half an hour, he said attacking the needless harassment of the former Congress President.

“This is nothing but harassment in the name of interrogation. The ED has launched a probe based on a complaint filed by BJP leader Dr Subramanian Swamy. But the complaint directly submitted by the Karnataka Contractors’ Association President Kempanna to no less a person than Prime Minister Narendra Modi himself on the 40% commission payment in State Government’s contracts, has not been investigated so far. Why this double standard?,’’ he asked. 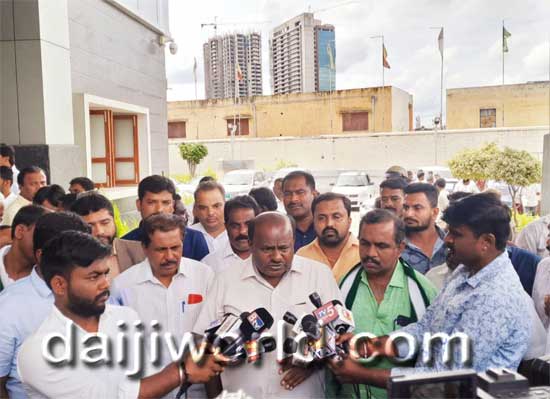 The interrogation of Rahul Gandhi by the ED is nothing but a political vendetta and it is evident to anybody, he said answering a question.

Why Modi was silent on 40% commission?

The former chief minister said an Engineer lost his life in the drain recently while a woman lost her life on account of accident due to potholes. “The prime minister does not talk about the shoddy work done by his own government or the 40% commission charge against Bommai government. The government has spent Rs 32 crore over the two-day visit of the prime minister. The same money could have been utilised for the development of at least one gram panchayat. But Modi failed to visit the State when it was suffering from floods or Covid,’’ he said.

Kumaraswamy said the progress and development achieved by the country happened over the last 75 years and not during the last 8 years of Modi rule.

The former chief minister continued his tirade against Modi and reiterated that the Bengaluru suburban railway project was conceived by former prime minister and JD(S) supremo H D Deve Gowda. “But Modi and the BJP leaders are going about town bragging that they had conceived the project. Let them come with facts and ensure that the people know the truth,’’ he said.

While complimenting the prime minister for performing Yoga on the World Yoga Day at Mysuru with the citizens, Kumaraswamy took strong exception to Modi’s claim that previous governments had done nothing for the development of the State and Modi should not stoop the low level of denigrating the service and contribution of previous governments.

“Modi should have the magnanimity and large heartedness to acknowledge the work done by the previous governments in the past,’’ he said.

“All past prime ministers starting with the first premier Jawaharlal Nehru have contributed a lot for the development of the country. Let the people know that Modi alone and only his government had not done all the development in the country during the last eight years. The prime minister must not claim that he has done everything and must adopt a non-partisan attitude towards the work done by his predecessors. It is wrong to claim that Modi alone has done everything,’’ he said.

The JD(S) leader pointed out that Nehru made immense contributions towards the development of agriculture, irrigation, industries and various other sectors. “Let us remember that the first five-year plan was implemented by borrowing Rs 200 crore. Do we know the size of the country’s annual budget at the time?,’’ he asked.

Continuing his attack Modi for his “tall claims” that he had launched Rs 33,000 crore worth of projects in Bengaluru little knowing that there is no contribution from him. “He (Modi) has laid foundation stones for projects initiated by previous governments. On the Bengaluru suburban railway project, Modi brags that he is implementing it in 40 months what could not be done in 40 years,’’ Kumaraswamy said pointing out that he had taken up the project and had even discussed with the then Union Railway Minister Piyush Goyal in 2018.

The JD(S) leader accused the BJP leaders of dumping the suburban rail project in cold storage and resurrecting it now just before the elections to Bengaluru Mahanagara Palike. He also pointed out he had conducted eight meetings on the implementation of the Bengaluru-Mysuru Express Highway as against tall claims by BJP leaders and Modi without knowing the actual facts.

The former chief minister said Deve Gowda had laid the foundation stone and started the work on the Bogi Bale Bridge across Brahmaputra river in Assam. But it was Modi, who inaugurated the bridge and bragged that he was the architect without even showing the courtesy of acknowledging the role Deve Gowda even once. “The local media, however, questioned why Deve Gowda was not invited,” he said.

Kumaraswamy lashed out at Chief Minister Basavaraj Bommai for criticising the opposition parties. “The BJP claims credit for the work done by the previous governments without bothering to remember that they themselves had opposed the projects while in opposition,’’ he said and pointed out that two children had died in the collapse of a flyover in Delhi.

Kumaraswamy said he felt sorry for Bommai, who is nothing but a “remote controlled chief minister’’ and alleged that all the decisions were taken at Keshavakrupa, the RSS headquarters. “In the PSI recruitment scam, I had talked about a kingpin. Everybody knows, who the kingpin is. The investigation is a sham as they know everything,’’ he said.

“BJP had opposed Aadhaar, GST, Mahatama Gandhi Rural Employment Guarantee Scheme and other reform measures of the previous government. But after coming to power, BJP is claiming credit for the same schemes shamelessly,” he lashed out.

The former chief minister assailed the Agnipath Scheme, which is being implanted despite the fierce opposition from the youth. “Who proposed the scheme? Is the country’s protection and security not handled so far? Did the army or defence experts and parliamentary consultative committee recommend the scheme,’’ he questioned and urged the Centre to come out with all facts.

“Agnipath is an RSS idea and ploy. RSS wants to infiltrate Armed Forces through the Agnipath scheme. It is a pilot scheme to introduce Nazi force on the Hitler era in India,’’ he said pointing out that some BJP leaders claim that Agniveers will provide training to youth to become barbers or security guards.