Mumbai, Jun 20 (IANS): Voting for the biennial elections to 10 seats of Maharashtra Legislative Council continued with both the ruling Maha Vikas Aghadi and Opposition Bharatiya Janta Party praying for a 'political miracle' for the one crucial seat on which there's a main contest among 11 candidates, here on Monday.

Emerging from their five-star weekend retreats, the legislators of MVA allies Shiv Sena-Nationalist Congress Party-Congress and BJP were driven in buses to the Maharashtra Legislature at Nariman Point with senior leaders keeping a close watch on their respective flocks. 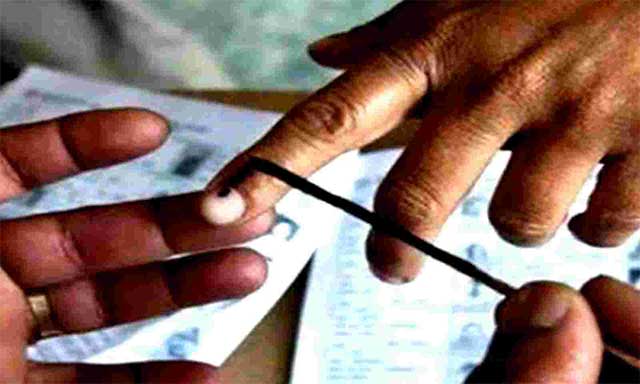 Polling started on a brisk note with over 225 MLAs across party lines casting their votes under the eagle eyes of their respective polling agents by 1 p.m.

A total of 11 candidates are vying for the 10 MLC seats vide the electoral college comprising 288 MLAs, though effectively 285 shall vote in the elections on Monday (June 20).

The MLC elections are witnessing a thriller contest with the prime contest between Congress' Bhai Jagtap and BJP's Prasad Lad, both vying for the crucial 10th seat.

Jagtap, 66, is a trade unionist heading the Bharatiya Kamgar Karmachari Mahasangh (BKKM) and President of Mumbai Congress, while Lad, 51, is an ex-MLC and ex-chairman of Mumbai Buildings Repair and Reconstruction Board.

Of the 288-member strong lower house, one Shiv Sena MLA Ramesh Latke died recently, while two NCP MLAs Anil Deshmukh and Nawab Malik - currently in jail - were denied permission by Bombay High Court to vote for the MLC polls and have now moved the Supreme Court.

The quota for winning - depending on the actual votes cast - would be 26 or 27 per candidate, and the votes of 29 MLAs of smaller parties or independents are expected to be the clinching factor.

With a strength of 106, the BJP can comfortably bag four of the five seats it is contesting and the battle will be for Lad's candidature vis-A-vis Jagtap.

The Sena with 55 legislators and NCP with 51 MLAs can easily win their two seats respectively, while the Congress with 44 legislators would require around a dozen votes from the independents, smaller parties or its allies.

Both MVA and BJP are desperately wooing the independents and smaller parties though the Samajwadi Party, All India Majlis-E-Ittehadul Muslimeen and Bahujan Vikas Aghadi have kept their strategies close to their chest.