The leaders and activists gathering near the ED offices in the state capital and the second capital (Nagpur), shouted slogans against the BJP, ED, and flayed attempts to muzzle the Opposition parties. 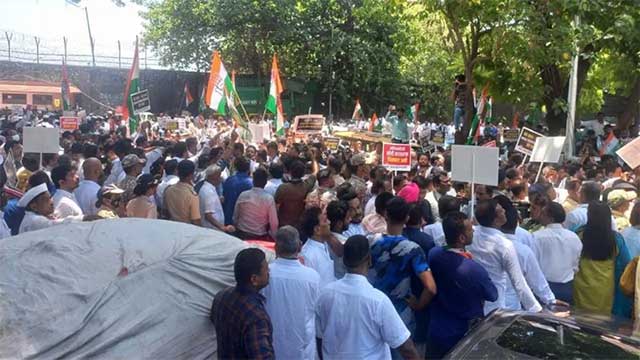 Leading the agitation, state party President Nana Patole slammed the BJP government at the Centre for pursuing 'political vendetta' against Congress President Sonia Gandhi and MP Rahul Gandhi as part of its conspiracy to 'silence the Opposition parties' by misusing central probe agencies.

"In tune with this ploy, the ED has served notices to Soniaji and Rahulji to trap them in a fake case. The BJP is working in violation of the democratic principles and the Constitution. The Centre has turned agencies like ED, CBI, IT, NCB into its puppets and are deploying them to crush the Opposition parties' voice," said Patole.

The Congress chief said as part of BJP's designs, opposition parties or their senior leaders across the country in non-BJP ruled states are being systematically targeted, raided and action is being taken against them.

"The Congress has been consistently raising its voice against these oppressive, tyrannical and arbitrary tactics of BJP. Last year, we took to the streets to oppose the three black agriculture laws, inflation, unemployment and other burning issues," Patole said.

Later, Mumbai Police rounded up several leaders including Patole and Jagtap, which the Congress termed as "pressures on the police" to scuttle the anti-Centre agitation.

The Opposition BJP state President Chandrakant Patil flayed the Congress protests terming them as attempts to browbeat the central probe agencies but it would not have any impact.