Mumbai, Jun 7 (IANS): With barely 72 hours left for the seat-edge suspenser Rajya Sabha elections in Maharashtra on June 10, all parties have resorted to herding and hiding their legislators to prevent possible 'political hijacking' by the opposite side, here on Tuesday.

As it became clear that the smaller parties and independents hold the proverbial key to the final outcome for both the ruling Maha Vikas Aghadi and Opposition Bharatiya Janata Party, each side hurled full-throated allegations of 'poaching' and 'horse-trading' at each other, adding to the excitement of the usually bland indirect elections. 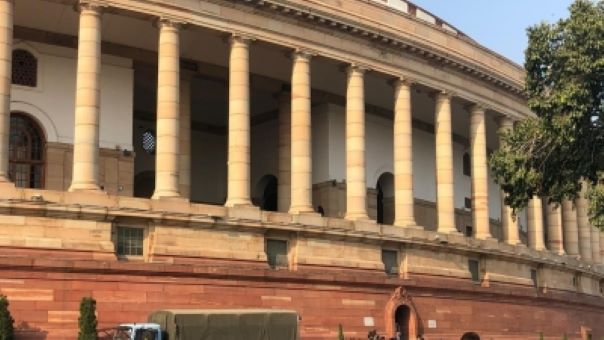 Not willing to take any chances, the MVA allies -- Shiv Sena-Nationalist Congress Party-Congress -- and the BJP, have ordered their valuable MLAs to "pack up their bags" and come to Mumbai for a 'retreat' till the RS elections, which may even extend till the June 20 Legislative Council polls.

They are being hosted in luxurious ambience of deluxe hotels or resorts as the top leaders on both sides wrack their brains to ensure the victory of their respective candidates.

The chief battle will be for the 'sixth seat' for which the Shiv Sena candidate Sanjay Pawar will be locking horns with the BJP nominee Dhananjay Mahadik -- both party veterans from Kolhapur.

The Maharashtra Legislative Assembly with 288-members comprises the electoral college and each candidate requires 42 votes to notch a win in the Upper House of Parliament.

This time, with the presence of the seventh candidate put up by the BJP despite the changed permutations and combinations post-October 2019 assembly elections, the elections have become a cliff-hanger.

Given the current numbers commanded by both sides -- the MVA and the BJP -- the latter needs around 12 votes to ensure a smooth sail for Mahadik.

Barring that, the MVA allies can easily get their one candidate elected while the BJP can get 2 elected with their respective present strength.

This time, the Sena has put up Sanjay Pawar for the 'sixth seat' which is contested by BJP's Mahadik, where the smaller parties and independents could play a crucial role.

The MVA leaders have already accused the BJP of bulldozing tactics with "money-power" and "threats" of Big Brothers like ED, IT, CBI, etc. waiting to "lasso" the "gullible ones".

Top MVA leaders, declining to be quoted, claim that given the numbers game, "the BJP is fighting a losing battle" just to keep its central leaders in good humour, while the BJP side winks and contends that "surprises cannot be ruled out", as the clock ticks away for the E-Day on Friday.

Sena's Chief Spokesperson Sanjay Raut -- who is also one of the contestants -- slammed the BJP for criticising the party's move to herd all its legislators, while a confident Parliamentary Affairs Minister Anil Parab assured that "all those who supported us in 2019 are still with us", hinting at victory for Sanjay Pawar.

State NCP President Jayant Patil and Congress President Nana Patole on Tuesday reiterated that the MVA will win the 4 RS seats it is contesting and foil the BJP's plans to grab a third seat though it lacks the numbers.

Congress and NCP Chief Spokespersons Atul Londhe and Mahesh Tapase, respectively, made it clear that the "BJP's horse-trading market" will be a flop as the three parties and all their supporters are fully united to give a challenge to the BJP.

"We came to power in 2019 and since then we have contested and won all elections together The BJP has made innumerable efforts to topple the MVA, but failed miserably each time, so they keep issuing fresh dates and deadlines," Tapase pointed out.

The four parties are now busy holding classes for their respective legislators and supporting independents or smaller parties' MLAs on the RS election process to avoid confusion in the crucial preferential votes, the importance of the 'Party Whip', etc.