Kolkata, May 27 (IANS): Rajat Patidar's blistering unbeaten century (112 off just 54 balls) might have caught the country by surprise, but not the soon-to-be 29-year-old, who had belief in his skills and knew he had the "ability" to excel on the big stage.

The Indore-born cricketer smashed 12 boundaries and seven maximums as his ton guided Royal Challengers Bangalore to a massive 207/4, which was the winning total as the Faf du Plessis-led side secured a place in Qualifier 2 at the expense of Lucknow Super Giants.

Patidar said that he takes the pressure out of the equation when he plays his game. 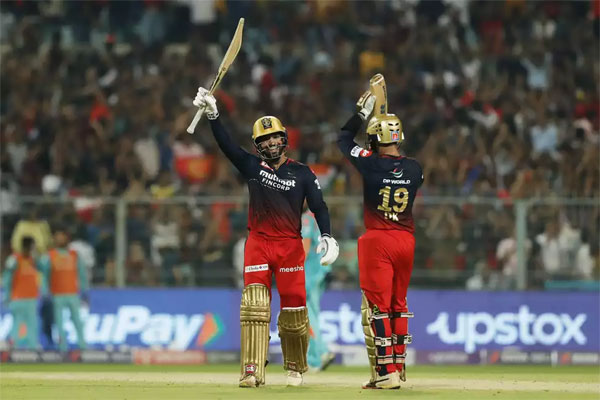 "When I time the ball, my focus is on it. The last over of the powerplay when Krunal (Pandya) was bowling to me, my execution went fine then and I got confident afterwards.

"I never feel any pressure as I think I have the ability to make up for the dots," he explained.

RCB wicketkeeper-batter Dinesh Karthik, known for his death-over hitting, too had lavished praise on Patidar, whose innings played a key role in his team winning by 14 runs against Lucknow Super Giants in the Eliminator.

With Bangalore four down at 115/4, Patidar shifted gears seamlessly to reach his maiden IPL hundred off 49 deliveries in the 18th over. He and Karthik, who remained unbeaten on 37 off 25 balls, smacked 84 runs in the last five overs in carrying Bangalore to 207/4 in 20 overs.

"It was probably the best innings by an uncapped player that I've seen. Outstanding batting. He is very cool, calm, and has a shy personality. It shows in his batting, you get the feeling that he is lazy but that is just his personality. Lovely guy, hardworking with a shy personality. Rajat Patidar played some great shots and made my job easier, that's a key factor in a good team," said Karthik on RCB's Game Day segment video posted on the franchise's social media accounts.

Title: Patidar's ability to take pressure out of the equation key to his batting