Bengaluru, May 24 (IANS): The text books revision row is taking new twists and turns every day. Referring to the distorted regional anthem allegedly written by Text Book Revision Committee Chairman Rohith Chakrathirtha earlier and questioning the decision of the ruling BJP to put him in charge of textbooks' revision, former Chief Minister H.D. Kumaraswamy demanded that he be sent to prison.

He warned that the BJP will lose its base in Karnataka if it plays with the feelings of the people. "The gateway to south India will permanently close on the BJP," he said. 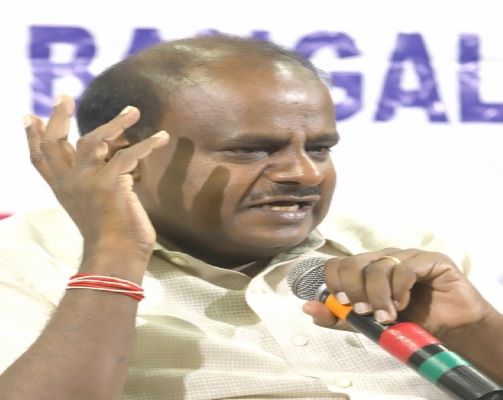 "Regional anthem of the state has been insulted. Those who had insulted it should have been booted into prison," Kumaraswamy stated without taking the name of Chakrathirtha.

"I am waiting for the release of the textbooks. There is a reference in a lesson that Kuvempu was able to be a poet by the support of others. Who is that fellow in the committee? What is his background? Rashtra Kavi Kuvempu has been insulted. When Kuvempu lived, this fellow was not even born," Kumaraswamy stated.

Progressive organizations, political parties, writers, women organizations and NGOs have decided to stage a state-level protest on May 31 against the saffronisation of school and college syllabus by the BJP government in Karnataka.