Bengaluru, May 24 (IANS): B.Y. Vijayendra, son of former Chief Minister B.S. Yediyurappa, on Tuesday, urged his supporters to exercise restraint after they launched a social media campaign against the BJP for denying a ticket to him for the June 3 Karnataka MLC bypoll.

After the candidates' list was announced sans Vijayendra's name, his supporters expressed anger and criticised BJP High Command and National Organisational Secretary B.L. Santhosh, who is known as a sworn enemy of Yediyurappa. 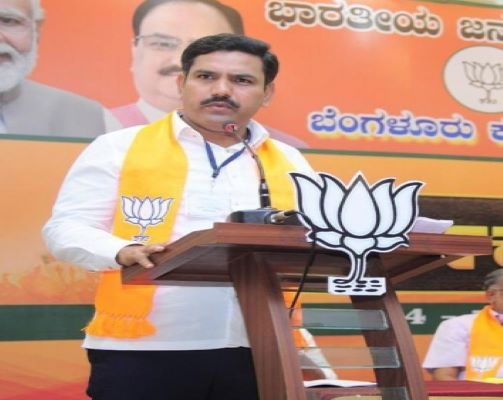 "All are common party workers. The party has never disappointed the capable and everyone should restrain and maintain calm and courtesy," Vijayendra said.

"My father always believed that Sangh's discipline, party organisation as real service and went on that path. The party and people of Karnataka have enabled him to take oath as chief minister for four times for the same reason," he explained.

The party has given me the post of vice-president and nursing my leadership. At this stage, if criticism, announcements, unnecessary comments are aired in social media, it will be detrimental to the sentiments of my father and not a support, he said.

BJP state president Nalin Kumar Kateel said that the high command has chosen the candidates from the list sent by state BJP unit. "This is my team," he said.

Core Committee has recommended the name of Vijayendra unanimously. "He has other opportunities in the party. All calculations are made while issuing tickets. Vijayendra is vice-president of the party and has more responsibilities," he said.

Yediyurappa was hopeful of getting MLC ticket and ensured the entry of his son into state cabinet with a prominent post. It is to be seen how Yediyurappa who has been snubbed by the party reacts.