Udupi, May 14: More than 30 tonnes of sardine (Buthai) fish was caught by the fishermen of coastal area. This is sold to more than Rs 30 lac.

Arabian Sea from Mangaluru to Gangolli is rough since some days due to Asani cyclone in Bay of Bengal. This caused the sardine fish to move to the shore which resulted in the tonnes of fish caught by the net spread in sea by the fishermen.

Generally, sardines are found in abundance during the beginning and end of fishing season. However, the fishermen say that the species of this fish, which is most sought after by the coastal people for its healthy oil content, is reduced from the past four to five years. 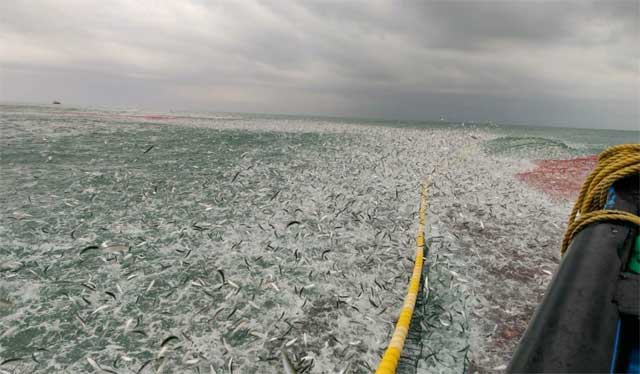 Mostly purse seine boats get this fish. Many purse seine boats have stopped fishing well before the end of the season this year. However, the few ones which are still out in the sea were able to cash in on the bounty of Sardines.

Sathish Kundar, leader of fishermen community says that as sardines are small in size compared to other big fishes, they swim in groups when attacked by big fishes and reach shore due to atmospheric pressure and end up in nets of purse seine boats. There is also a possibility that the sardines have come towards shore as the water has become too cold in deep sea due to Asani cyclone.