Opposition leader Siddaramaiah on Friday said that the ruling BJP government, which stands exposed in terms of corruption and misadministration, is all set to implement the Karnataka Protection of Right to Freedom of Religion Bill, 2021 to divert the attention of the people. 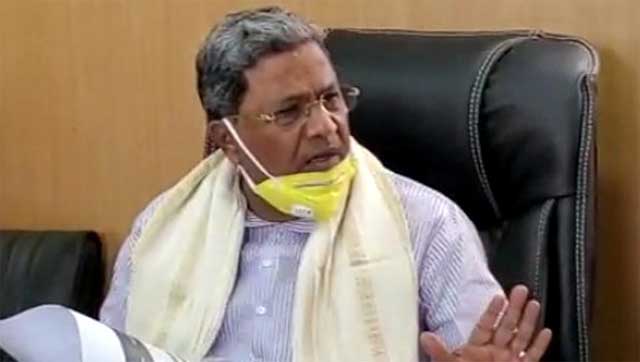 Siddaramaiah had appealed to the Governor to reject the Anti-conversion Bill, saying that the law "was brought by the ruling BJP only with an intention to threaten minorities and harass them."

"Then what is the need for the new law? The only reason is to threaten and harass the minorities," he said.

"This is the political agenda of RSS. True Hindus practice harmony and universal brotherhood, and will reject communal politics of BJP. We see constant attacks on minorities whenever BJP comes to power. People of Karnataka are ashamed of this government," Siddaramaiah charged.

"The constitution allows individuals to freely convert to the religion they want. There is also a law to prevent conversions. There are police and courts to enforce this. So does this mean that BJP has no confidence in the institutions?" Siddaramaiah questioned.

"The Congress will never allow the misuse of The Karnataka Protection of Rights to Freedom of Religion. Our party will firmly stand with each brother belonging to the minority community, those who are threatened by the government. The party will launch aJan Andolan' against the proposed bill," he said.

Chief Minister Basavaraj Bommai has stated on Thursday that since the Anti-Conversion Bill is prolonged in the state legislature, it has been decided to bring an ordinance towards its implementation. "The matter will be discussed in the cabinet and a suitable decision would be taken," he said.

The Karnataka government had tabled the proposed controversial Karnataka Protection of Right to Freedom of Religion Bill, 2021 popularly known as Anti-Conversion Bill in the legislative Assembly in Suvarna Vidhana Soudha at Belagavi on December 21, 2021. However, it is yet to come before the Legislative Council.

According to the Bill, any converted person, his parents, brother, sister or any other person who is related to him by blood, marriage or adoption or in any form associated or colleague may lodge a complaint of such conversion which contravenes the provisions. The offence is made to be non-bailable and cognizable.

Title: Congress to protest against move to bring ordinance on Anti-Conversion Bill