Kasargod, May 12 (IANS): Five days after a team of forensic experts led by the local police exhumed the body of Malayali vlogger Rifa Mehnu from a cemetery in a mosque near Kozhikode to conduct an autopsy, her husband has been served a notice to appear before the police probe team.

The vlogger was found dead on March 1 in Dubai, where she lived with her husband Mehnaz and their two-year-old son.

Mehnaz, who hails from Kasargod, has been served the notice to appear before the Kozhikode police probe team. 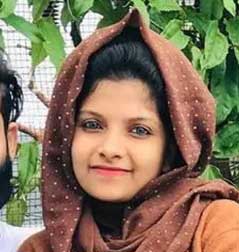 The probe team served the notice after taking statements from the family of Mehnaz and have told him to follow the law of the land or face consequences.

Rifa, 21, a social media activist with lakhs of followers on Instagram, appeared regularly on the photo-sharing app along with her husband.

In Rifa's last video posted a day before her body was found, she along with her husband were at a restaurant in Dubai.

On March 1, Mehnaz and a friend found the body.

Later the body was brought from Dubai and was buried in the cemetery at the mosque at Kozhikode.

However, Rifa's parents registered a complaint over their daughter's mysterious death after which the local police in Kasargod booked her husband.

Meanwhile, the Dubai Police are also conducting a probe into the circumstances leading to Rifa's death.

Rifa and Mehnaz met on social media and were married for the past three years.

The full report of the autopsy is expected very soon and the probe team is waiting to go forward in the investigation based on the findings.