Mangaluru, Apr 23: After deputy commissioner Dr Rajendra K V instructed to maintain status quo and stop the works related to renovation of mosque at Malali as a controversy of siting of remnants of olden Hindu temple on land of mosque cropped up, city police commissioner N Shashikumar said that, as a precaution police security is put up near the mosque till the issue is resolved.

Mohammed Mamu, president of the Mosque said, “This mosque has a history of 900 years. Outer portion of the mosque was demolished for renovation. The inside look of the mosque is portrayed as a temple in social media. That created confusion. Revenue officials have taken all documents pertaining to the mosque and have assured to resolve the matter within a week.” 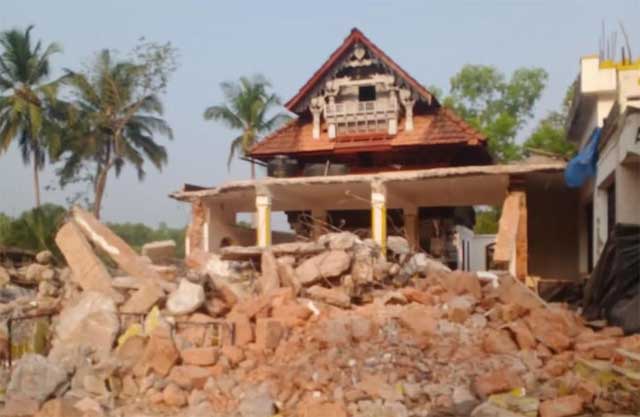 Sharan Pumpwell, divisional secretary of VHP said that they are suspecting that some old Hindu temple was demolished in order to build the mosque. He has asked for inspection of the site by archaeologists.

Third civil and JMFC court also passed an interim stay order on all works pertaining to renovation at Malali mosque. The court held inquiry on the petition filed by Dhananjaya, resident of Ganjimath. The court also instructed not to create any damage to the part of building that resembles temple. It has also prohibited entry of members of mosque committee and other followers of the religion from entering the building.

Meanwhile, Munir Katipalla, president, state unit of DYFI, said, “What business Sharan Pumpwell, who is creating chaos not to allow Muslims to do business during temple fairs, has inside the mosque? In fact, Sharan Pumpwell and his team should have been arrested for having entered the mosque illegally in a bid to disturb the communal harmony. It is really condemnable that police commissioner and deputy commissioner are bending to the law breakers and maintaining silence in front of majority religious fundamentalism, which has political backing at present.”