Mumbai, Apr 17 (IANS): Amid the political cacophony of loudspeakers in the state, the Jama Masjid Al Shams on Mira Road here has quietly blossomed into a glittering jewel among all the mosques in Maharashtra, creating waves during Ramzan.

Since the start of the holy month of fasting, thousands throng the mosque -- run by the Hussain family's Waqf recognised trusts -- in the Muslim-dominated Nayanagar locality, and is inspired by the striking mosques in Madina, Saudi Arabia, and other Muslim countries. 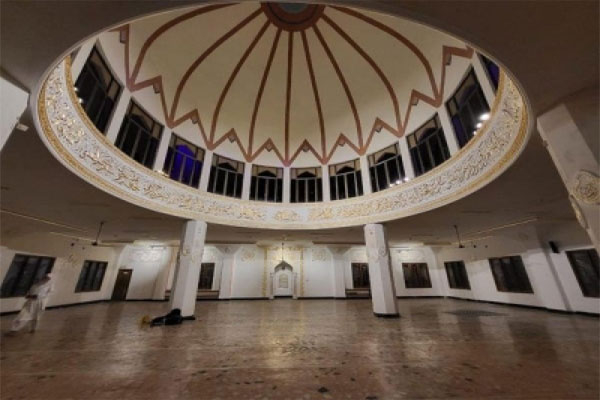 Catapulted among the most awe-inspiring mosques, the Jama Masjid Al Shams had humble beginnings in April 1979, in what was then a marshy area with salt pans, mangroves and tiny farms dotting a stark landscape, now thriving with over 1.25 lakh souls.

"The small mosque came up soon afterwards with the inspiration of my father, Syed Nazar Hussain. In 1995-1997, we expanded and refurbished it for the growing population. After 25 years, in 2020-2022 we have completely modernised it at a cost of Rs 5 crores," a proud Muzaffar Hussain, the Managing Trustee and Congress ex-MLC told IANS.

Sprawling over an acre, in its new incarnation, the mosque is billed the state's biggest as 5,000 faithful can pray simultaneously. It boasts of some of the most modern, ‘green' initiatives, gadgets and operations seen at any mosque in the country, with awestruck Hindus, Sikhs and Christians flocking to view and admire it.

The entrance is via a grand old 20-feet-tall and 15-feet-wide Burma Teakwood door, which is now layered with glittering gold-leaves and opens into a 3,000 sq. feet courtyard covered with a Ferrari tensile shed that reflects heat to keep the interiors cool.

Straight up at the end of a flight of stairs is the striking entrance to the main mosque, nestling under a massive 80-feet high central dome with a 40-feet diameter, besides a 108-feet tall minaret, topped by a tiny cupola, fully gold-plated and bathed in specialised colour lighting to enhance its beauty at night.

The airconditioned main mosque, with a rich fawn-and-brown carpet, presents an ethereal experience, German yellow lights enhancing the pure gold leaves, panels or engravings adorning the walls and pillars, the 99 names of Allah and Prophet Mohammed, along with their meanings, inscribed in gold letters for the faithful.

A 100-unit solar power station, an imported ultra-modern sound and lighting system have been installed for the daily ‘azaan' and other announcements for the faithful, with the Quran verses and other religious scripts played softly - like piped music - at specified hours in the courtyard.

"I was mesmerised by the soothing, divine ‘azaan' (call for ‘Namaaz') by expert muezzins and Quran renditions by ‘Qaris' at prominent mosques in Saudi Arabia, Turkey and Nairobi… I always wanted something similar here…" said Hussain.

Accordingly, a group of muezzins was imparted rigorous training over several months to render the ‘azaan' - which lasts barely 3 minutes, 5 times in a day - and the Quran verses, in a soothing, lilting and pleasing style to the listeners, with a little bit of technological help.

The new lighting system, imported from the USA, has 900 patterns of light sequencing based on the primary red-blue-green colours, and will display one unique colour pattern daily.

The sound-light are software controlled and can be operated only by software engineers who are in the service of the mosque to prevent any tinkering by amateurs, Hussain added.

Perturbed by the rush of the faithful, especially during Ramzan or other Muslim festivals, leading to crowds spilling outside, the venerable Imam Maulana Mansoor Ahmed said now the congregations are kept in 2 or 3 batches (jamaats) only inside.

"Earlier, people were compelled to offer ‘namaaz' on the roads, pavements or in gutters, but after the multiple ‘jamaats', that problem is solved, though the numbers have substantially increased," said the Imam, who describes the new-look ambience, glory and grandeur of the Jama Masjid Al Shams akin to ‘Jannat' (heaven).

"During the Covid-19 pandemic lockdowns, the mosque was practically deserted… We took the opportunity to give it a total facelift of international standards and over 90 percent of the work was completed before Ramzan… The rest will be done after Eid-ul-Fitr," Hussain smiled.

The final plan is to launch a YouTube channel this month-end to live-stream the mosque activities like ‘azaan', ‘namaaz', Holy Quran teachings with meanings for English medium children and housewives in an adjacent ‘Madrassa', religious discourses during Moharrum, other social-religious events for the global audiences, he added.

Hussain reveals that the entire mosque has come up from scratch in 1979 with resources from the Hussain Family trusts, and "not a single rupee solicited in donations".